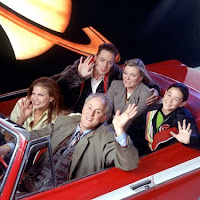 My wife and I are the worst kinds of insufferable snobs who are always telling people at parties we never watch much TV. For some reason, this makes us feel culturally superior or at least equal to the people who lie back they never do either.

Some examples: “Father Knows Dick;” “Will Work For Dick;” “Eleven Angry Men and a Dick;” “I Brake For Dick;” “I Enjoy Being a Dick;” “Angry Dick,” and the monumentally relevant, “These Dicks They Are A Changin’.”

You should see the gape-jawed stares we get in highbrow restaurants when I scream at her that she doesn’t know Jack about Dick.
Posted by Chris Rodell at 1:45 PM