Two handsome devils, me and the stranger 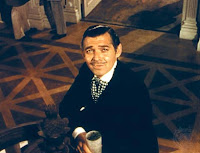 The two looked like what we in high school used to call “burn outs,” dingy, cloudy-eyed inhabitants of my high school’s smoking area.

And consider that for a moment: at one time many of us attended high school in a not-too-distant age when enlightened school administrators actually had designated areas where teenagers so disposed could go out and smoke their butts off.

When you think about it, it was an age of great liberty, one the Founding Fathers would surely have approved of, even as the Founding Surgeon Generals gave their scolding disapproval.

But back to the burn outs. They were standing and, yes, smoking outside of a local tobacco shop while I was approaching during my afternoon stroll.

I turned around and saw no one. They thought I was Shellhammer, and for a still-lingering instant I was wishing I was.

Shellhammer’s a great name. Surely the guy had to be some kind of butt-kicking private eye -- Shellhammer P.I.! -- and for purposes of clarity, I’m talking about anatomical butts, not nicotine-laced ones.

“Aren’t you Mr. Shellhammer? The guy who teaches at Latrobe Elementary?” he asked.

Now I’m dying to find Shellhammer for a plethora of reasons, one of which is to thank him that our physical similarities allowed me to reach in my brain’s thesaurus and pull out the rarely used word plethora.

We are forever at the mercy of those whom we resemble.

If someone tells a beautiful woman she resembles the lovely Kate Winslet it’s an enduring compliment that’ll brighten her every day. Years from now, grandchildren on her knee, she’ll be flipping through old photos and telling the little sprouts that strangers used to tell her she was a ringer for the ravishing Winslet.

It won’t matter even a tiny bit when the bored kids say, “Who the hell’s Kate Winslet?”

But tell the same woman she looks like drug-ravaged crooner Amy Winehouse and she’ll dive for her iPhone to start researching face transplants.

Is Shellhammer handsome and dashing, the way I picture myself? What if he’s a pointy-headed nerd?

I think it would be a great Twilight-Zone sort of gift if for just one afternoon we could see ourselves the way others, particularly strangers, see us.

I guess I’ve always had a chip on my broad, muscular shoulders because everyone always said my older, taller brother looked just like Tom Selleck, Magnum P.I.! They always said I looked like I never got enough sleep.

Once I met an accountant whom I’d been told I resembled and I was floored by what I perceived was a gross insult. He was dumpy, had bad teeth and walrus-like jowls. Plus, for heaven’s sake, the man was an accountant. I didn’t know whether to punch him, myself, of the handful of people who’d said we were look-a-likes.

I gaze in the mirror -- and I do an unhealthy amount of that -- and see a rakish face with a dashing devil-may-care smile. I say outloud, “Why, if it isn’t Rhett Butler! The ladies in the parlor are breathlessly awaiting your arrival!” Then I turn serious, searing the mirror with a look the romance novelists call penetrating. “When people see this face,” I say, “they must immediately think of Gregory Peck in “Mockingbird” or “The Guns of Navarone.”

I do this almost daily for nearly 10 minutes until the exasperated mirror finally blurts out, “Would you get the hell out of the bathroom and for heaven’s sake try and earn a little money, you vain ass!”

So, of course, I’m nervous about someday meeting my Shellhammer doppelganger -- and what a fun combination that is to say! Go ahead, take a little reader break and try it three times outloud.

I told a good buddy of mine, one of my most steadfast blog readers (Hi, Ronnie!), about it. Well, he knows Shellhammer and sees the resemblance. Turns out my twin’s a retired art teacher at the local elementary school. He hunts, too.

That’s encouraging. With art, he has a sensitive side and I hear that’s a plus with the ladies in the parlor, but the hunter bit gives him a rugged outdoorsy edge. The guy’s probably good in a bar fight.

And he’s a teacher, too, and I have a great and enduring affection for anyone who devotes their lives to educating our youth, and that even goes for all those tyrannical dolts who tried to fill my head with so much math and crap (another fun word combo!) all those years ago.

That’s good. It reduces the chances I might one day get dragged into the police station and shoved in front of some trembling crime victim whose addled brain will instantly cause her to shriek, “That’s him! That’s the Latrobe Flasher!”

On the contrary, if he ever does an anonymous good deed, I might get credit, which I’ll certainly hog.

But none of that matters to me. I could care less if Shellhammer’s a good guy or a demonic, pants-dropping fiend.