Some stuff I'm prayin' on 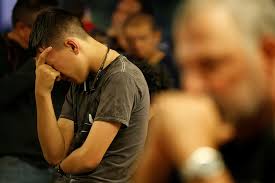 Just learned my older brother has been in and out of the hospital all week with severe abdominal pains that have, thus far, evaded diagnosis. We spoke, I empathized, and told him I’d pray for him.

And as I said so, it dawned on me that lately I’ve been doing a helluva lot of praying.

I probably pray for God to cure/heal/de-escalate on behalf of maybe two dozen or so friends/loved ones/drinkin’ buddies and/or luckless strangers in sovereign nations.

For those keeping score at home, on most days it seems like my prayer record is roughly 0-24.

It’s like my prayers are a lousy NFL franchise that’s given up on the season in the hopes it’ll get the No. 1 pick in the draft.

Is it possible to pray so ineptly the deity to which we pray says, “Ah, screw it. I’m going to divine the exact opposite of every one of this dumb bastard’s prayers.”

Here are just a few of my prayers these days:

I pray hard for the Ukrainians. Nothing in my life — now six decades! — has rattled me more than this vicious and pointless Russian war. Experts say it could destabilize all of Europe. I don’t know much about that but, let me tell you, it’s de-stabilizing the shit out of me. I pray that God will soften the heart of Vladimir Putin and he’ll pull out all his troops and say he’s sorry and that it won’t happen again.

Just in case that prayer is asking too much, I toss in a prayer that some brave Kremlin insider puts a bullet through Putin’s brain. And I pray that the heroic killer doesn’t turn out to be even worse than Putin.

I pray for the people of Syria, Afghanistan, Iraq, and the beleaguered Uyghur minorities in China. I pray that even though Ukraine has shoved them out of the news, they still know that — cheer up! — guys like me are still praying for ya!

I say prayers for friends who are grieving for recently deceased parents, and I pray their tears serve as a lesson to the living to love and respect their parents while they‘re still around. It’s a noble thought. What’s ignoble is I always ask God to direct that prayer to my own daughters for mocking their father for things like weight gain and hair loss.

I often declare the best line I’ve ever written is, “Be so at peace with the world, the only thing you have left to get off your chest are your nipples.”

It’s a very good line, marred only by the unruly mention of nipples, which I’m finding is very disturbing to otherwise friendly audiences. I pray the people who come to hear me speak come to peace with their nipples.

But a contender for best line is: “Fools pray for riches and get nothing. The wise pray for understanding and need nothing.”

It’s one of the only things I’ve written that I wouldn’t be ashamed to submit for inclusion in “Bible II: The Sequel.”

I pray for the planet. I fear that the Russian War will accelerate our deadly drift of ignoring the climate change issues, and the eventual winner of World War III will take a look around and say, “We fought to win this?”

I pray that God will end poverty, injustice, hatred, greed and want.

I pray that one day it will be revealed why so many of God’s children are fated to live lives of desolation and misery. I pray I’ll one day be told why so many of our prayers seem to have been an utter waste of time.

And, yeah, even though it contradicts my second greatest line, I can’t help but pray for riches and influence undeserved by material fools like me.

Sorry. Just some things I had to get off my chest.

Thanks, Chris. I feel the same way you do, but I now realize I need to stop praying for riches. I am already so blessed in many ways. I have enough of the materialistic things but need more compassion. Pray for peace.

Amen, my friend. I wonder if those kinds of prayers go right into som prayer spam file. Lord knows there is much worthy of our prayerful attention.

The world is in such a state right now. I pray that those in charge make decisions based on the good of us all rather than on keeping themselves in power or getting reelected. Your Cousin Cheryl

Thank you, Cheryl. Yes, it's very discouraging. Despite the thrust of this post, I'm praying like crazy. Hope you're well!