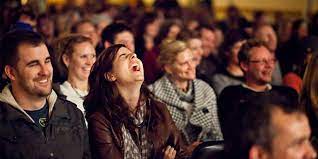 I’ve said, truthfully, I had nothing to do with raising our kids until they were advanced enough to get my jokes. That means that other than my rather bystander role in their orgasmic conception I was sort of an absent parent until each was about 4 and capable of understanding the construction of your basic knock-knock joke.

Da knees are above da ankles.

Boom! Now, to a 4 year old that is about the height of wit and sophistication. Better, I’d usually repeat the joke with the audience of one on my lap and with emphatic tickling timed to the punch line.

The result was peals of joyful laughter and adoring cries that Daddy was hilarious.

Those days are long gone. I know I’ll never tell another joke with an adoring daughter sitting on my lap.

Well, not one of my daughters.

See, that, too, right there was a joke. An unwise, ill-considered joke, but a joke nonetheless.

I mention all this because I just learned the composition of the joke one of history’s  most intelligent men thought was the funniest thing he’d ever heard.

And it’s not that funny. But to Albert Einstein, the peerless genius, it is comedy gold, the e=mc2 of humor. I learned it from the previously referenced 1996 Denis Brian book, “Einstein: A Life.” Here goes:

“Guy has his car towed to a mechanic. Says it just shut down. Dead on the street. Can he fix it? Mechanic looks at the car. Circles it two times and then gives it mighty kick by the right front fender. It works! The car is purring like a kitten.

“Mechanic scribbles on a blank piece of paper and hands it over. Paper says, “Labor: $1 to kick car. Knowing where to kick car, $199.”

Hello? Is this thing on?

This is the point where somebody would frantically be pumping up the laugh track to supplement the polite chuckles coming from an audience that doesn’t want to appear rude by not laughing loud enough at the genius’s joke.

I’ve often wondered how authentic was the laughter from the apostles when Jesus joked. I’ll bet it was similar to scenes from “The Sopranos” when Tony told a funny to the gang at the old Bada Bing.

We don’t know if Jesus ever joked. I like to think He did. I love to laugh and I love being around people who make me laugh. In the Bible He seems the stoic, but the Bible has zero laughs. There’s nothing funny about it. So in that regard the Bible can be compared to the 6-season run enjoyed by the CBS series, “Two Broke Girls.”

It’d be neat if some Biblical scholars said they found Scriptural evidence that while hanging on the cross, right before He said, “Forgive them, Father, for they know not what they do,” Jesus tugged at the collar of His robe and said, “I yell ya, I don’t get no respect! Ooh, tough crowd!”

Does it matter if Einstein admired a dumb joke above so many good ones?

I think it does. It calls into question all his scientific and life achievements. If he thinks that lame joke is funny, where else has he fallen off the beam?

After all, he was alive during a time when the world was swollen with urbane humor, thoughtful wit. And I mean swollen.

Many will say Stooge humor was too stupid for Einstein, that he’d have been drawn to something much more cerebral.

I contend the Stooges were the most cerebral act in Hollywood history.

The action never went more than 30 seconds without one or the other of them getting bashed in the brain.