August tweets of the month (may contain some nudity) 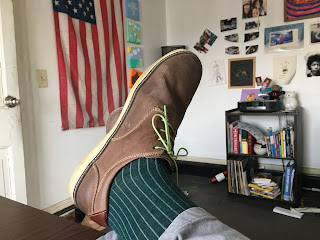 Sorry to let you down, but I was just kiddin' about the nudity. I hear nudity can really drive up the numbers so I thought I might as well try. All you get are tweets -- although some nudity is implied ...

• If you think you and your spouse argue over traditional breadwinner roles, be thankful at least you're not nudists. Nudist couples really resent being told who wears the pants in the family.

• I wonder if the proctologist conferences ever have seminars titled "What To Do When You're All Bummed Out," and if that's a good or a bad thing. Or is the whole premise just a tad too, well, cheeky?

• Gentlemen prefer blondes. The rest of us will settle for whatever we can get our hands on.

• I don't know what I was expecting to find, but for those of you curious about word origins, the word "Sabbath" has nothing to do with the one day a week when folks used to take a bath.

• Even serenely disposed Siamese twins find it impossible to be anything but beside themselves all the time.

• As there is no discernible difference in the damage to a structure that's burned up and one that's burned down, I propose we start urging news casters to simply say a place burned. Once that's settled we can get to work on the redundancy of saying "out-of-control wild fires.”

• Sleight-of-hand enthralls w/ nimble tricks & dexterity. How come you never hear of anything but sleight-of-hand? There ought to be more sleights. Sleight-of-ankle? Sleight-of-elbow? Can anyone think of an obvious appendage it'd fun to use for magic tricks? I can't. Stumped!

• This is the year we've simultaneously reached peak friend saturation, that is the number of people we'd like to get to know better are outnumbered by the people we wish we'd never met. Thanks, Facebook!

• The phrase "wouldn't wish it on my worst enemy" has lost all currency. Today we're all wishing the worst on actual Facebook friends based purely on whether they choose to wear or not wear a mask.

• Fans of alcoholic irony will be pleased to know that the price of a Manhattan, the popular bourbon-based cocktail, is now $18 in upscale Manhattan bars -- nearing the $24 it cost Dutch traders to purchase in 1626 the entire island that became Manhattan.

• If I understand the priorities of the freedom-lovers who are refusing the vaccine -- and I'm pretty sure I do -- the best way to get them to take the shot is to advertise that  one side effect is 3-hour erections. #VaXXXine

• Doing a Zoom presentation for 250 Arnold Palmer fans tonight. My "things-to-remember list" includes: Be crisp, enunciate and "Don't pull a Toobin!" And yes I love it that a guy yanking off during a Zoom call can be said to be "pullin' a Toobin!”

• I just don't understand how in a world with millions upon millions of refrigerators, all with ice-making capacity, we still worry about the melting of the polar ice caps.

• Do you think Mary and Joseph had a gender reveal party or did they surmise that would be too anti-climactic?

• I’ve taken to answering questions about the severity of my Parkinson's by saying, "Well, I'm still kickin'." This gives my friends the opportunity to decide if I'm being metaphorical or if a random kicking motion is just another peculiar symptom of motor skills gone awry.

• Think having multiple towns named Ocean City is confusing now? Wait 'til full effects of climate change are felt. Every city will be an Ocean City.

• My antipathy towards our space-racin' billionaires may be greater than yours, but who else thinks next time Bezos, Musk & Branson are all in outer space at once, we should move earth to a remote part of the universe when they're not looking.