The dog that turned me into a cat person 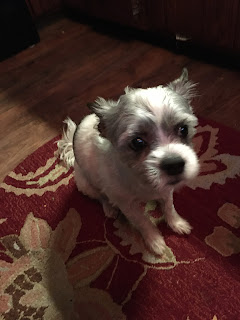 NOTE: I swear I strode down a hundred hallways and tried a thousand doors in the hopes one of them would lead me to a more wholesome conclusion, rather than the filthy double entendre of which I’m here to preemptively warn. But none of them worked and I’d already spent too much time on it. I figured a fair warning like this could alert the delicates to either brace themselves or seek controversy-free Sudoku diversion. Why preserve something racy enough to potentially alienate precious readers. I thought it was funny.

Speculation that the world’s loudest dog barked himself deaf increased when an actor called a TV dog named Snickers and our Snickers didn’t look up.

The name is uncommon enough you’d think a real dog named Snickers would look up from his 24/7 duty of licking the spot where his marble-sized testicles used to be to see if they’d made a show about him.

Like maybe a story about how an annoying little yip dog was introduced to a cranky writer and steals his heart and becomes the playful inspiration for a string of best sellers.

I’ve tried to like this dog, honest. I believed the prophesies of those who said he’d grow on me.

Ten years hence and he still’s not grown on me.

Peed on me, many times, sure. But not grown on me.

It’s a family consensus that Snickers hates men and there’s plenty of supportive evidence. If a man comes to the house, Snickers will bark and snarl until the visitor departs to, I guess, rev his vehicle up to 100 and drive straight into the trunk of a sturdy oak.

He’s so alert he barks anytime even a single leaf strikes — and we live in the woods!

Snickers is as near as we can figure a terrier/chihuahua mix, which sounds like the plot of ‘90s canine rom-com. He weighs 17 pounds.

Your typical ant — and is there any other kind? — weighs 1 mg and is capable of lifting 5,000 times it’s own body weight.

It’d be like you and me rolling up our sleeves and lifting Cleveland.

Snickers’s bark is like that. It’s like the combined 150- decibel air horns of 5,000 trucks condensed into one-sixteenth of a second and pointed straight into my ears.

In the instant before I’m certain my heart is about to detonate, I imagine Snickers in a white smock administering an EKG that reacts to each bark so violently the needle flies off and starts spinning around the room like a ghost helicopter.

A good dog likes to relax near warm fires.

Snickers likes to start them.

And everything’s an emergency. He never saunters or ambles. It’s always like he’s racing to be first to the 5-alarm blaze down at the local orphanage. Call him to sit with you on the couch and he comes running, his nails clicking on the hardwood floors like spent shell casings on the rifle range.

Of course, if the kids read this they’ll think I’m a monster. They can’t understand how come I don’t love Snickers.

If they only knew …

With me and Snickers it’s personal.

I know his dirty little secret.

He wants to screw my wife!

Or at least her leg.

Before Snickers, Val and I used to sleep all smoushed up together, a dual position commonly referred to as spooning. And it was marvelous.

Then along came Snickers. Why he chose to sleep with us and not the girls, I do not know. But he began to borrow right between us. Then once he’d severed the bond, he’d lay in a way to maximize our distance.

It was apparently all part of his plan.

Because now about once a week now, he’ll spring to life and start humping Val. Right in front of me!

I’d say it takes real balls to do that right in the same bed as her husband but he hasn’t had real balls since 2013.

And just like that I’m an unwitting participant in one of nature’s most perverse threesomes.

That’s the story of the dog that turned me into a cat person.

A cat doesn’t bark or put its housemates on edge with his nervous tics.

Plus, as a heterosexual male, if I’m ever forced into a menage a trois involving a domesticated animal I’d at least want a shot at a little pussy.

Daughter, 7, says Bible says I must love our dog