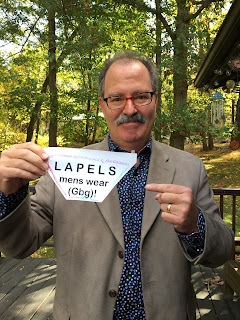 Our daughters made a nice impression on some friends this weekend and I was happy to share the compliments.

“They said you were charming, poised and articulate,” I said, sensing right away they were experiencing proud surges of youthful self-esteem. It was heady praise.

It’s why I felt momentary shame when I instantly pricked their ego-expanding balloons.

It’s true. A child is unworthy of genuine compliment until they’re about 25 years old and are out and about in the world. Until then, most everything they are — how they look, how they act, what they have — is a result of parental influence.

I can say this because I understand an increasingly big part of who I am is a direct result of someone else.

Kevin’s owned Lapels, a fine men’s clothier in downtown Greensburg, since 2002. That was around the time when I dressed year-round like a guy who was always available to help a drinking buddy move a porch couch.

That all began to change when Lapels opened.

I guess I bought my first shirt there in about 2003. Most of you have seen it. It’s the vivid Tommy Bahama floral print shirt I’m wearing on the cover of “Undaunted Optimist.” The plush black sports coat was another of Kevin’s recommendations.

It’s because of Kevin I’ve become a bit of a dandy, this at an age when most men are beginning to transition from tailored business suits to elastic waist band warm-up duds.

Prior to Covid, I’d been doing a lot of public speaking and needed to look sharp. Plus wearing fine clothes gave me confidence. And it was all thanks to Kevin.

He and his associate Bob Nolan seemed to take pride when they found just the right garment to compliment a new sports coat I’d purchased for a high profile public appearance.

So today was going to be a big day for Kevin and I. I was scheduled to appear via Skype on KDKA’s “Pittsburgh Today Live,” for a segment that was to run later.

I was very excited. It seemed like a great opportunity to promote my book.

It was very generous. He picked out the playfully dashing Luciano Visconti number you see in the picture and wished me luck.

The appearance on a popular regional TV show never felt to me like a sure thing. Dates were changed, calls went unreturned.

Then all of a sudden it became a sure thing. We were set to do a 4-minute segment today at 10 a.m. Just yesterday, I ran through some topics with the host and followed up with some scripted talking points.

After some initial nervousness I believe I settled into some lines and sight gags that would ensure a winning appearance.

Then out-of-the-blue (the black actually, it was 8 p.m.), came the soul-deflating e-mail.

“Unfortunately,” “cancel,” “disappointing,” “final say,” “so terribly sorry” were some of the key phrases. It ended with a plea: “I hope you understand.”

Evidently, someone must think I’ll be bad for business, that I’ll drive viewers away, or that I’m the kind of crass opportunist who’d use my time to shamelessly plug things like the businesses of my friends.

(I plead guilty on that last count. I had positioned the little sign I’m holding above so it would appear on the Skype shot right above my head.)

It’s all good. I bear no grudge.

My heart has no room for hard feelings — not as long as it’s consumed with the toxic smog of lost opportunities, hurt confusion and the rising tide of bile belched forth from deep in the soul where once pretty dreams go to die.

So it’s not unlike those Friday evenings when the bartender says I’ve had enough.

But don’t feel bad for me. I’m confident other opportunities will arise and the good times will resume their roll.