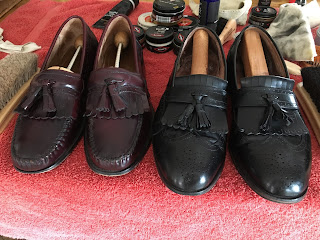 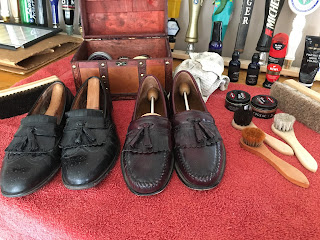 Here’s a sampling of the supportive comments I got when I told friends I am starting a shoe shine business:

“Did Val throw you out before or after you told her?”

“What? Did you think opening a bait shop would thrust you into a tougher tax bracket?”

As an old worm farmer, I should have thought of a bait shop first. Worms are good office mates — quiet, industrious, don’t cause office squabbles by wearing their tiny MAGA hats.

But selling worms by the cup sounds boring and I’m afraid it would lead to exotic recipe browsing whenever my stomach began to growl.

So please give a warm welcome to …

“He’s Got the Heart if You’ve Got the Soles!”

Tin Man is an obvious nod to my Tin Lizzy base of operations. The name won out over …

• “Toe-tal Eclipse of the Shoe: Shines So Dazzling They Blind!”

• “The Shining: Heeere’s Johnny … With Your Like-New Shiny Shoes!”

About two years ago, I started becoming enamored with nice shoes. This roughly coincides with when the goddamned Parkinson’s began to impose a limp. I figured quality shoes would ease any discomfort.

And I sensed there might be an interesting book in it. The proposal I’m pitching is called, “No Business like Shoe Business.”

I got a pair if nice if unpretentious dress shoes — Johnston & Murphy, Oxford black CapToes, $199 — and from scratch began to acquire the brushes, polishes, waxes and dressings one needs to enhance the appearance of fine leather shoes.

But I only had two pair of dress shoes. I’ve since learned the average man has 12 pair of shoes; the average woman 27 (four pairs of which never leave the box).

I dream of buying some real show off shoes.

Still, I could own two dozen pair of shoes and not exhaust all the polishes.

A community shoe shine business could solve a lot of problems. I could pitch it to church men’s groups and tie it in with book talks.

I see no downside.

I already have one satisfied customer. Prominent Latrobe attorney and all-around good guy Chuck Mason got two pairs of loafers done last week. That’s them up top (afters above). I contend the difference is dazzling.

So please get in touch, my local friends, if you have some shoes that could use a shining. People who matter will notice.

“Invest heavily in your bed and your shoes. Because if you’re not in one then you’re in the other!”

Keynoting in my beloved “pimp”shoes

Thumbs up to professional shoe salesmen/women 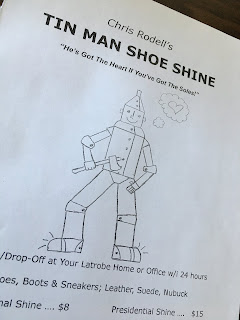