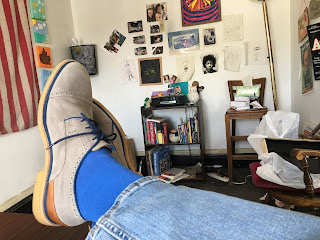 I don’t recall the instigation for the research, but the result stuck with me:

Man, the only animal to spend 80 percent of its entire day either in bed or on its ass, is the only one to feel the need to pay lavish amounts for footwear.

That’s just here in America, a land that’s mostly been paved and landscaped for at least 100 years; $79.9 billion!

For some perspective, Americans in 2019 spent $119 billion on beer and $36 billion on chicken wings. Both substantial sums, sure, but beer and wings are essential to human existence. Whether we’ll perish without either one or the other is an experiment of which I want no part.

But could you live without shoes (not to mention podiatrists, chiropractors or Dr. Scholl’s corn, callus and bunion relief pads)?

Your hairier ancestors did. Anthropologists estimate humans did not begin wearing shoes until just 40,000 years ago.

I say “just” because we’ve been walking upright for roughly six million years. The key word here is roughly.

Imagine strolling barefoot through the Jurassic wilderness. There’d be jagged rock formations, knife-like sawgrass, hot magma and for as far as the eye could see huge steamy stacks of gooey stegosaurus poop. I’ve seen no evidence of it, but I have to imagine there were ample cave drawings advising people to please wipe their feet before entering.

Now imagine — not strolling through that hostile landscape — but running for your very life. Imagine being chased by a hungry T-Rex determined to convert you into a steaming pile of dino doo-doo.

I don’t know whether early man was capable of coherent thought, but I have to imagine the last thought of many forlorn cavemen went something like: “Boy has this day sucked. Not a wink of sleep. That egg I was going to have for breakfast hatched and walked away and the missus is still sore at me for not wiping my feet.”

I keep coming back to this because on some things I feel a kinship to cavemen.

“Now I’ve got to outrun this dinosaur or miss bowling night with Barney. Oh, well. Bare-feets don’t fail me now!”

I find it impossible to channel cavemen without lapsing into recollections of Fred Flintstone.

When you think of it in those terms, the shoe was our most essential innovation, much more so than the wheel, which didn’t roll onto the scene until about 3500 BC.

Quick point: I wonder how many hundreds of years it took to follow-up the invention of the wheel with the necessary invention of the axle and if, prior to that, even a single caveman became adept at the unicycle. I imagine a caveman on a unicycle would have done well on a prehistoric version of “Cavemen Got Talent.”

I guess this has all been on my mind lately because of something even more absurd, more preposterous, than the fact that man — oh my and, yes, women — is spending $93 billion on footwear each year.

And that is the fact that I’ve become an enthusiastic part of it.

Yes, me, a 57-year-old self-quarantining man who can go days without a soul seeing his soles, enjoys splurging on fancy shoes. I’ve spent over $850 on shoes in the past 18 months. (The above are brand new Johnston & Murphy Wagner Cap Toes, originally $164, but I shrewdly waited for the inevitable sale and got ‘em for $44 or just $4.40 per toe. Sweet!)

Prior to this binge, I probably hadn’t spent a total of $850 on shoes in 20 years, most of that on what are for marketing purposes are called athletic shoes or what I now call utility shoes. Put me in a $200 pair of Air Jordans and the only way I’d be capable of doing anything remotely athletic was if Michael Jordan let me ride around atop his shoulders.
Even more preposterous than the expense is that the odds are increasing that within five years I’ll be eligible for handicapped parking privileges. Thus are the eventualities of having Parkinson’s Disease, with which I was diagnosed in Feb. 2018 or about the time I began scanning Allen Edmonds, J & M, Beckett & Simonon and other websites devoted to quality shoes.

I’ll leave it to the pop psychiatrists to pore over that coincidental timing.

So as the world slides whoopsie-daisy into a second Great Depression, a man with no job, decreasing mobility and a bleak future is spending hundreds of dollars on fancy footwear few will ever see.

By God, I make Fred Flintstone look by comparison like a genius.

But I’m finding after years of indifference that when the feet are happy the rest of the body can’t help but tag along.

Another oddity: My shoe infatuation has me considering a career change. I’m thinking about becoming —- brace yourself — a …

This occurred to me yesterday afternoon, which I spent polishing and waxing my shoes as a vital part of caring for and extending the life of my stylish investment.

With the air perfumed with saddle soap, polish and warm carnauba wax, discouraged from leaving the house, it dawned on me how I, a man with unreliable balance and a pronounced limp, had stumbled into a most satisfying hobby.

I thought, you know there’s probably a lot of men with nice shoes who’ll pay $12 to ensure their shoes maintain their heavenly shimmer. Get in touch if you’re interested.

This sounds more promising than the other job I was contemplating; that being — I hope you’re still braced —

Because all this wild talk of me seeking gainful employment is likely making you woozy, let me be realistic. This is likely the the first step in a journey that will lead to an interesting book. I’ve enjoyed immersion world history books on seemingly mundane topics like salt, cod and paper — and those are just the ones done by talented author Mark Kurlansky.

A light-hearted book by a man who with every step is losing the ability to walk and suddenly becomes infatuated with fancy shoes might draw some interest. Plus it would give me a chance to unload on the foot puns — and wouldn’t that be a, er, kick!

It would also give me justification for splurging on the tan Beckett & Simonon Yates Oxfords wingtips I’ve begun to covet.

But, really, it’s difficult to right now justify. I already have six pairs of dapper shoes, ones for every occasion. And that’s optimistically assuming society will again enter a time when conditions allow for the occasional occasion.

Until then, I really don’t need more show-off shoes. My problem isn’t having too many shoes.

My problem is having too few feet!

Keynoting in my beloved “pimp” shoes

I now have a shoe fetish