Return this decision to sender: Palmer stamp to be unveiled in Orlando, not Latrobe 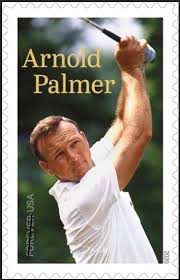 I’m painfully aware of the personal and professional consequences of using this blog — named the 32nd most influential blog for Amish readers — to ruffle the feathers of the braintrust behind one of the world’s most beloved and iconic brands.

But when a company worth in the neighborhood $700 million gracelessly stumbles over a 55-cent postage stamp then feathers must be ruffled.

The U.S.P.S. is March 4 unveiling the Arnold Palmer commemorative stamp in Orlando, home to Mickey Mouse, rather than unveiling it in Latrobe, home to, well, Arnold Palmer.

Do I blame the post office? I do not. I suspect they’re merely doing the ill-considered bidding of Orlando-based Arnold Palmer Enterprises.

I contend it diminishes the legacy of Palmer every time something is done to put space between him and the iconic place he called home. And make no mistake, Latrobe was home to Palmer, a fact that was essential to his enduring appeal.

Palmer was raised in a home that was 320 yards from the one where he was living when they took him to the Pittsburgh hospital where he died September 25, 2016. He was 87.

Think about that. A man who could have been pampered in palaces around the planet never left the defiantly proud shot & a beer steel town that raised him. Hell, he never left the same street.

I have some authority in the matter. In the 18-months since the release of my Arnold Palmer book — the one Palmer confidant Jim Nantz says is, ahem, the best book anyone’s written on Palmer — I’ve been privileged to befriend many of the most ardent Palmer fans.

Most of them are eager to play Latrobe C.C., buy some merchandise, and have a drink or two at the Tin Lizzy. Many of them remind me of my father so I love them and their soulful motivations before we’ve even met.

Like my father, they knew all about Palmer the golfer. They didn’t need to hear about which club he’d use from the 150-marker when there was a stiff wind in his kisser.

No, they wanted to hear what it was like when you ran into him in the grocery store, the barber shop, or the local tavern.

In Latrobe, Palmer was a fixture; in Orlando, a tourist.

So why is the postal ceremony there, not here?

I can only speculate but part of it seems partly pure laziness. The decision makers all live there and the ceremony will coincide with the opening of the Arnold Palmer Invitational at Bay Hill Club & Lodge. It’ll wind up as a 200-word items at the bottom of some notes column; NBC will daily run a 15-second spot.

That’s lazier than even the pampered golf writers they presume to woo. Guaranteed, they’d get more compelling and colorful stories if they at random chose a dozen golf writers and flew them to Arnold Palmer Regional Airport for an overnighter and a round of golf at LCC.

The other part — and again I’m only speculating — is that the people who run Arnold Palmer Enterprises simply don’t believe in Latrobe. I think they’d like to shed some of the fiscal burdens of running what’s been called “sentimental aspects” of the Palmer legacy.

Who does believe in Latrobe? Palmer pal Gov. Tom Ridge who told me he envisions a day when people come to Latrobe to pay homage to Palmer the way they do in Orlando with Mickey whazisname.

“People are always going to want to see the town where Arnold Palmer grew up, see his workshop, his office, his memorabilia and play the course where he learned to golf,” Ridge says.

Oh, and I can think of one other guy who believed in Latrobe. Many of Palmer's most iconic marketing campaigns hearkened back to ol’ Latrobe.

What this town has to offer are assets, not burdens. To think otherwise is short-sighted.

I apologize for once again ruffling feathers, but when top decision makers keep on acting like turkeys then a few feathers are bound to be ruffled.

Banned from Latrobe C.C. … Me!

Biblical sorts of praise for my Palmer book

This blog named 32nd best Amish blog in the world