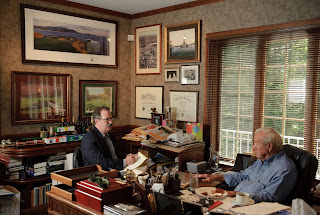 The call informing me I was no longer welcome at Latrobe Country Club came coincidentally three years to the day after Arnold Palmer died. Now, that’s another thing I never thought I’d have in common with Ben Roethlisberger.

I was now being forbidden from signing them. I called the organizer of an area charity raising funds to fight the rare disease that killed his little boy and said, sorry, I can’t help.

Can anyone sense there are elements of over-reaction in this unfolding story?

Either way, we’re left with one of the most powerful and lucrative enterprises in sports business pitted against me, author of the blog that was recently named the “32nd Best Blog and Website for Amish Readers.”

How did we get here?

I’ve for more than 20 years enjoyed stellar two-way relations with leaders and rank-and-file employees of Orlando-based Arnold Palmer Enterprises. I liked them, they liked me. How much?

In 2012, I was feted at an interview/luncheon among eight company leaders where I was given a hand-shake deal on a job that would pay in the neighborhood of $70,000 plus benefits (see detail-laden link below).

And you need to understand the heirloom significance of the term “handshake deal” to the legend of Arnold Palmer. It’s foundational to his success and stature.

So did I get the job?

It’s been seven years and I’ve yet to hear back. My calls and letters were all ignored. I think my wife still thinks I made the whole thing up.

I finally wrote about it in 2014, the day after I appeared in the wonderful Golf Channel documentary on Mr. Palmer.

My post was scathing. Sample line: “This isn’t behavior worthy of Arnold Palmer. This is behavior barely worthy of weasels.”

What was the reaction?

There was none. I continued to get all the opportunities I enjoyed prior to my bitter screed. In fact, an evident acclaim began to build around my Palmer Q & A’s, so much so that the vaunted chairman of APE invited himself into one of our last sessions, an imposing move that would have rattled less seasoned writers.

His post-interview evaluation as he shook my hand (hand shake!): “They all said you were the best. They were right. Well done.”

No repercussions there. And there were none in September 2016 when a top Palmer company executive, grieving the legend's death three days prior, said, “Chris, you are the voice of Arnie’s Army.”

Google “Voice of Arnie’s Army.” You won’t get a network announcer, a Golf Channel executive or one of the flaccid sycophants from the tour press tent.

You get me. And that was a year before I wrote the book Jim Nantz said is “the best book anyone’s written about Arnold Palmer.”

Well, brace yourself, because The Voice has something that needs to be said. It is:

“No one who earns their living standing behind the name of Arnold Palmer should ever treat anyone the way Orlando-based representatives of APE have now twice and without apology treated me.”

This brings us to my second indiscretion (see second link). I used the blog to personally bash the Bay Hill director of golf. I was angry how he’d responded  to my Christmas week call of cheer with pouting complaints and surly threats.

I let it slide for three months — didn’t want to do anything rash — before responding. Did I go too far? Probably. Was I justified? I think so.

I think it just galled me that people who are well-compensated to extol the values of Arnold Palmer fail to live up to them. My experience isn’t nearly as intense, but I still consider it a privilege to respond to strangers the way he would.

In lieu of that, how can we end this unseemliness?

Well, let me be the mature one.

First, I’ll not mention either incident again, despite provocations like today’s embarrassment, if my Bay Hill friend apologizes. He must have been having a bad day. No one rises to that professional elevation being the kind of jerk he was with me for two excrutiating minutes.

The second condition is even easier to settle. Just someone — anyone — from Orlando answer one question:

About that hand shake job offer, geez, when can I start?

I think a company like yours would love to employ at least one guy who really, really cares about responding to difficult situations the way most of us used to think Arnold Palmer would.

I got screwed by Bay Hill … again!
Posted by Chris Rodell at 8:43 PM