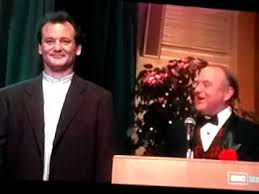 It was during our annual family viewing of “Groundhog Day” that I shared a recollection I’d for unfathomable reasons long concealed. It was during the giddy scene near the end where Bill Murray’s “Phil Connors” character shows just how rewarding life can be when we devote our days to pure altruism.

He saves a man from choking. He bestows newlyweds with Wrestlemania tickets. He delights an audience with his musical virtuosity. He becomes universally beloved.

And the Punxsy women find him irresistible.

He is the star of the local bachelor auction. The women go wild for him. A bidding war erupts.

I don’t know why I never brought it up before, but as the bids kept going higher and higher, I piped up, “Boy, does that bring back some memories.”

The 17 year old snagged the bait: “Wait, you were in a bachelor auction?”

Indeed, I was. For about 90 minutes back in 1989, the tuxedoed me was considered one of the most eligible men in all Westmoreland County.

The particulars of how it all came about are fuzzy as is, well, any sober recollection of 1989. I know the other eligibles included doctors, lawyers, philanthropists and other regional muckety-mucks.

That in hindsight makes me proud because it meant I was chosen purely for looks and personality. Because what young debutante even then thought spending time with a young guy who covered local municipal authority meetings was a good way to secure a solid future?

The girls grilled me with questions. They wanted to know all about it. Were there a lot of bids? How much did I go for? Who won the bid — and there was some stinging remarks about what “winning” me meant.

It was some charity event held in the ballroom of the old Greensburg Sheraton. About 200 women were there to bid. As part of my package, I’d promised the high bidder I’d spring for a fine dinner on Pittsburgh’s scenic Mt. Washington followed by a dance party cruise on the Gateway Clipper.

The bidding started at $25. I remember strolling around the stage and smiling and pointing at each bidder, which did nothing to excite the crowd.

I was prepared for this eventuality. So I strolled to center stage and reached my hands down below the waist of my tux pants. You may think I did something salacious. I did not.

I didn’t pull my pants down.

I pulled them up.

I was wearing a pair of lush red socks that went way up the legs.

And the women went wild!

Who knew I could excite more women by pulling my pants up than I ever could by stripping them off?

In the end, I went for $225, a bit more than a buck-a-pound or about what was then the going price for ground sirloin down at the Giant Eagle.

The winning bidder was a pretty summer intern, a striking red head, who worked with me at the Trib. I was later told several of the women who worked at the paper had contributed to her winning bid, which was very sweet of them.

Interestingly, this was before I met the woman who’d become my wife began working there and we commenced a primal hook-up that’s endured nearly three decades.

I tell you, when it came to collegial canoodling that newspaper back then was thick with sin.

It was left to Val, of course, to ask the pregnant question that hung over the whole story.