Having a cow over imported milk 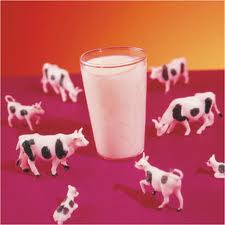 When I heard the FDA was banning the importation of suspect Japanese milk, my first thought was sympathy for that milkman has to hump milk from Tokyo to L.A.
Then I felt silly for thinking milkmen still existed. There haven’t been milkmen for 40 years.
Those were simpler times. Now we all get our own milk that comes to our neighborhood grocery stores.
From Japan!
If the act wasn’t so redundant, it’d be enough to make me have a cow.
Is America in the midst of a cow shortage? I guess it wouldn’t surprise me to learn American cows were being outperformed by Japanese cows.
We’ve for years heard stories about how our moronic children are falling behind the Japanese in things like math and science and, more depressingly, how to slap a stand-up double to the right field gap.
Now, if I understand correctly, even our cows are inferior.
I’m an utter -- and that’s utter, not udder -- innocent when it comes to international agricultural trade, but wouldn’t it make a lot more sense to just import the whole cow?
Maybe there are obscure cultural issues. Perhaps the Japanese cows have trouble fitting in. It’s possible American cows share some of their unappealing bigotries stereotypical of some teet-tickling farmers. But I’ve never seen any urban street cows so fair comparison’s impossible.
If that’s true, it offends me to my very core. Asian, American, Latina -- underneath, we’re all the same. Excepting, of course, cows have five stomachs.
And imagine for a second if the reverse were true. I wager it would be impossible for a single all-you-can-eat restaurant to survive if the average American had five stomachs. Any evolution in that direction would surely doom the bovine population.
But until that happens, the thought of America needing to import even a single glass of milk boggles my mind.
Only water is more pedestrian. If we ever run out of aqua, we’ll all be washing our cars with milk.
It is one of the few substances that’s yet to be infected with any hoity-toity pretensions. There are designer olive oils, salts, and vinegars that get treated like fine wines.
But no one’s ever going to goad consumers into participating in a televised taste test between Japanese milk and American milk.
No one 100 years from now is going to be trading a boutique gallon of milk at Sotheby's. If milk goes even a few days past its expiration date, we dump it down the drain and just run and get another gallon that, I guess, for some consumers comes all the way from Japan.
Like many enviro-conscious consumers we try and buy local. We get organic eggs from free-range chickens raised on a farm I can see from my house (if I ever erect and scale a pole about 3,500-feet high).
One of these days, I swear, I’m going to drive 20 minutes to that farm and personally thank all those chickens.
That cow-rich America is importing milk from Japan, a nation which I guess is about the size of greater Cleveland, says something is seriously out of whack.
It’s enough to drive a man to drink.
I wonder where I can find a good stiff belt of locally distilled Scotch.
Posted by Chris Rodell at 1:07 PM

Holy smithers... In what part of the country are they importing Milk from Japan?

In California the cows are Glowing but it's from Happiness - according to the commercials.

Personally I'd rather drink milk imported from Wisconsin.

I love the idea of cows so serene they glow. Ahhh!

Yeah, it's amazing that somewhere someone is drinking milk from Japan.

Go Pennsylvania cows! Our bovines take a backseat to no one!

That is just bizarre, and horribly wrong. My grandfather was a milkman for many years, going back to his start when he actually drove a horse-drawn wagon around Boston for deliveries. Man, that is just... wrong.

It defies all logic, doesn't it. Did your grandfather ever bitch about having to deliver to Tokyo?