Back when meltdowns were quaint 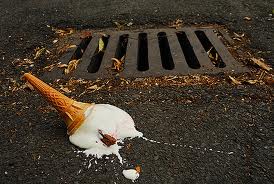 It hasn’t even been a week and I’m already nostalgic for days when sobering meltdowns had less to do with damaged core reactors and more to do with Charlie Sheen.
In fact, few words in history have changed their meanings as dramatically as meltdown, a term that has its actual roots in ice cream consumption.
This from the March 1937 edition of Ice Cream Trade Journal: “The (featured) ice cream melts down cleanly in the mouth. Due to the clean meltdown, a cooler sensation results in the mouth than with gelatin ice cream.”
Yes, I’m one of those nutty ice cream trade journal collectors.
Actually, that’s the first citation of the term’s usage from the Oxford English Dictionary.
Until this week, it hadn’t dawned on me just how popular the term meltdown had become. Meltdowns have been reliably splendid entertainment -- as long as it’s not happening to us.
Our celebrities meltdown. So do our 4 year olds. And, gadzooks, so do the nuclear power plants we construct on earthquake-prone tectonic plate shelves.
I don’t doubt every precaution was taken, but can’t help but think in 50 years history-savvy comics will refer to the incident and punchline it with some variation of “What the hell were they thinking?” That is assuming earth lasts another 50 years.
The energies we can’t live without are all killing us.
I see pictures of devastated Japanese clutching smart phones and wonder where they get the energy. Certainly, the charge has by now died right along with tens of thousands of their godforsaken countrymen and women.
Maybe holding the phone gives them some Teddy Bear kind of comfort.
I wonder if you could go back 25 years and say, “Okay, you can have all the cheap power you want, but at some point that power source will fail and contaminate you and your land for the next century. Your choice: cheap, deadly energy or reduced energy availability that’s going to cost you a fortune.”
Guaranteed, we all take the pig-out option.
It’s happening here throughout Pennsylvania where Marcellus Shale drilling is making instant millionaires out of struggling farmers and, it seems, everyone else (except, of course, land-poor bloggers like me).
But extracting techniques couldn’t be more loathsome. Roads sufficient to bear heavy machinery are constructed deep into the woods like the ones in which I live. The big diggers are hauled in and loud, unmanned drilling operations begin to raise  their ruckus.
The drills go thousands of feet beneath the surface to release tiny bubbles of natural gas through a repulsive practice known as “fracking,” firing a toxic brew of chemicals, water and sand into the wells to crack the shale and release the gas.
Of course, we’ve all been assured it’s perfectly safe by the executives who stand to lose millions the instant any of it’s revealed to be anything other than perfectly safe.
To me it sounds like the recipe for an ecological catastrophe that that will one day have our mutant descendants asking “What the hell were they thinking?”
It would be less galling if there was some sense of responsible oversight and if I could see some public good in the way of revenues flowing within all those streams of poisoned water in places where my grandfather used to fish and my children frolic.
But newly elected governor Tom Corbett has vowed he wouldn’t tax the companies being enriched by the drilling. Pennsylvania, the state with the most abundant drilling opportunities, is alone in not taxing the drillers. Corbett’s new budget includes massive layoffs and the end to services many of our neediest residents rely on to function.
And what again makes me most furious is my long-ago vow that I’d keep this blog relatively profanity free.
Geez, I’d love to carpet f-bomb the crap out of Corbett, who seems like an otherwise decent gent, but is either a dunce or a crook on this pivotal issue.
So I look out my back porch and instead of serenity I feel impending doom. I tune into CNN and see a more urgent manifestation of a doom we all dread.
It makes me long for bygone days when I could enjoy a nice Mint Chocolate Chip meltdown in my mouth while watching the latest celebrity meltdown being played out like it was something really significant.
Simpler, less complicated times.
Like last Friday.
Posted by Chris Rodell at 10:26 AM