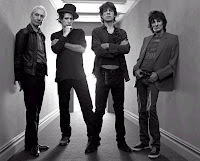 The most important nugget I gleaned during four years of incidental education at Ohio University had more to do with philosophy than journalism.

It was bestowed not by an illustrious professor in an august hall, but by a boisterous bartender in a dingy tavern.

I still repeat it word-for-word to youths who seek my wisdoms about how to navigate this cruel practical joke we all call life.

It is eight words long and I now share it with you to enhance your lives and the lives of the needy. Here goes:

“You can’t have a party without The Stones.”

That’s it. It’s all you need to know.

The Golden Rule, fortune cookie Confuciusisms and myriad self-help books all come up wanting next to that nimble little guidepost.

I’ve been to parties without the Stones and they invariably suck. A really good party needs the Stones.

And so does a really good life.

I love country music, listen to jazz, classical and bluegrass. My playlists are crowded with Dylan, Springsteen, Kinks, Petty, Van Morrison and the sublime Mark Knopfler. I can find something to appreciate in all forms of music -- and I don’t count rap, Celine Dion or anything Ryan Seacrest listens to as music.

But nothing hits me on the testicular level the way The Rolling Stones always have.

One thing that I’ve always loved about the Stones is that they’d be nothing without each other. Mick Jagger would be a banker, Charlie Watts would be a famous jazz drummer (famous to about 400 people), Bill Wyman would be a gynecologist, and Keith Richards would be a bum.

Even as a bum, Keith would still be the most interesting of the bunch and the one I’d sit on the sidewalk to listen to.

In fact, the only member of the original Stones whose life trajectory would not be altered would be Brian Jones who would still have died young.

And this is more complicated than it sounds, but The Stones have always been about the music. They would still be together and making great music if all the fame vanished.

The money, the girls, the excess has always been secondary to the music.

With the exception of guys like Steve Earle, you don’t see that kind of authenticity much anymore.

Mick was on Larry King the other night and, as always, I couldn’t take my eyes off him. His every expression is riveting. I was struck by how watching the 76-year-old King interview Jagger, 67, made Jagger seem 35 and King seem about 98.

The men are basically contemporaries.

It’s impossible to think of anything on earth that’s been as consistently outstanding as The Stones have been since 1964.

The Catholic Church? C’mon. Even America, the greatest country on earth, has had to endure Vietnam, Watergate and Kate Gosselin.

Compared to those institutions, the only smudge on the Stones during that same time, “Dirty Work” in 1986, is small potatoes.

Music in general’s been going downhill ever since, but the Stones still move the needle, even if they don’t use it anymore.

People who mock them and say they should have hung it up after “Some Girls” in 1978 just must not like music.

“What do they expect us to do?” Keith’s asked. “Set down our guitars and sign up for plumbing school? We’re musicians. This is what we do.”

And nobody’s ever done it better. Still. I could make raging rock fans out of primitive tribesmen by shoving earbuds into their heads and playing overlooked gems “Steel Wheels” (’89) and “Voodoo Lounge” (’94).

And it’ll sound sacrilegious even to many other Stones fans, but “A Bigger Bang” from 2005 ranks among their very best, including the revered “Exile.”

I defy anyone to listen to the songs, “Rough Justice,” “Driving Too Fast,” “Biggest Mistake” and the sublime Keith song, “This Place is Empty” and not be as moved as they are by the rock, country and balladry from their hallowed years.

I once, just for the fun of it, tried to compose the most depressing true statement about this riddle of life. Here’s what I came up with:

“Life is an endless series of disappointments, each one greater than the last, leading inexorably to the grave.”

Of course, I don’t believe anything of the sort. But life is short and life is hard. You need to crowd it up with all the love and laughter you can find before it’s all taken away.

Really, life is a party.

And you just can’t have a party without The Stones.
Posted by Chris Rodell at 12:40 PM