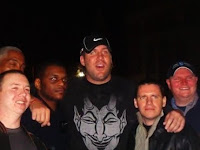 In a week when American Idol is planning to murder the Rolling Stones, Ben Roethlisberger is killing the Pittsburgh Steelers. It’s a bad week for my icons.

The Stones, now 50 years without a rape charge, will endure. They survived Vanilla Ice singing “Satisfaction,” they’ll survive this.

But the Steelers need to trade Roethlisberger to the Oakland Raiders while we can still get a good draft pick. That’s where he belongs.

I’m historically more comfortable in the role of defendant than judge. But I’m so disgusted by Roethlisberger that I want him gone. He’s making Tiger Woods look like a gentleman.

Many of these were the same people who about 10 years ago were saying, “Kill Kordell Stewart. He’s gay! Schenly Park! It’s true! My brother heard it from a friend whose cousin’s a cop . . .”

It was the sort of rumor genealogy that would have caused “Roots” author Alex Haley to pull his hair out by the, well, fistfuls.

Kordell, by the way, is now a married father of a 5 year old boy. Maybe he’s on some sort of gay sabbatical.

Ben, on the other hand, is a disgrace. He’s suspected of sexually assaulting a 20-year-old college student in a night club bathroom. Lawyers are still sorting out another sexual assault charge stemming from an unseemly 2008 hotel suite encounter with a Lake Tahoe casino employee.

The Tahoe one sounds contrived. The claimant waited a year to seek monetary damages and told conflicting stories to friends.

So far, there’s nothing dubious about the current allegation. The woman didn’t call a lawyer or hold a press conference. She went to the emergency room and called the police.

And the release of the police report is when things are going to really get ugly. The only possible chivalrous revelation to emerge will be maybe that Big Ben, who was wearing a Satanic t-shirt, held the bathroom door for her.

This is all happening as a bill from the Pittsburgh Steelers for $3,244 sits in my desk drawer. It’s for four season tickets that have been in my name for 15 years and in my father’s before me for 30 before that.

It’s crazy, I know, but Steeler fans like me like to think we’re better or certainly luckier than people who root for cheaters like Bill Belichik or pompous blowhards like Jerry Jones and Daniel Snyder.

When team founder Art Rooney died in 1988, he was hailed as one of the most beloved characters in sports. No one expected his son Dan would ever measure up to the old man. Instead, he’s surpassed him. He is the unrivaled conscience of a league whose “Rooney Rule” was instigated to promote minority hiring. In one of his first acts in office, President Obama appointed Rooney -- Happy St. Patrick’s Day! -- ambassador to Ireland.

They’ve been teams I’d be proud to root for if they played like hapless Cleveland Browns.

But they do not. They’ve won more Super Bowls than any other team and are one of the most envied franchises in all sports.

I’m hoping team president Art Rooney II, who continues to a family tradition of class and grace, will hold a press conference and say, “We’ve begun talks to trade Ben to the Oakland Raiders for draft picks we will use to compensate for the loss of one best quarterbacks in the game, someone we’d counted on to help make us winners for the next 10 years.

“We’re doing so because we’d rather lose with quality men than win with jerks. His consistent off-field recklessness convinces us this is a pattern of misbehavior a 28-year-old multimillionaire will not outgrow.

“Because there’s so much more to Steeler tradition than winning. I only wish Myron Cope were here to explain it to him in a voice so screechy that the only thing Ben will there after be able to hear will be the thunderous boos of stadiums packed with decent Steeler fans around league.

“And if talks with the Raiders fall apart, we’ll pursue a trade with the New Jersey Devils.

“Yes, I know they play hockey, not football, but as pictures posted on TMZ.com attest, Ben’s already got the uniform. And this much is becoming clear: He knows the Devil’s playbook.”
Posted by Chris Rodell at 1:52 PM

ben's a douche. men like him shouldn't have the privilege of playing in the NFL. i agree that the tahoe complaint seems out of place, and i did give ol' benny boy the benefit of the doubt with that one. but you'd think that he'd learn a little something by now. he's almost 30 years old and he's acting like an immature frat boy. the guy needs to learn some fricking boundaries.

with the money he makes, he could just purchase someone to make sexual advancements toward. i mean, really.

Well said, lexcade. I understand the argument that it's difficult to root for any professional athlete on the grounds that they are good guys. But if Michael Vick is going to be castigated, jailed, in fact, for transgressions against dogs, then anyone who mistreats women should be dealt with even more severely.

And, yeah, with that kind of money, he should be able to insulate himself from ever hearing this kind of charge. Tiger did for 10 years.

Good ya little douche, go ahead and desert the man when the chips are down.

As long as you get rid of that Big Ben jersey.

And never again wear it to imitate me at the Stillers games.

Ben? Was that you? I promise I'll never imitate you again. Bought that jersey for $40, wore it twice. Will never wear it again.

I looked good in that thing, too, dang it.

Disconnect the two points. Ben needs to be gone from Steeler black and gold even while granted the presumption of innocence.

His negative, patterned behavior is clearly evident regardless if not criminal, or even salacious. As Steeler blokes we have long been stuck somewhere between sanctimonious and quaint about our "organization" being different. Here is DR's chance to prove us correct.

Hear! Hear! John. I'm sensing there is widespread sentiment in agreement with you.

Thanks for chiming in.