Leno again-o: why critics are wrong 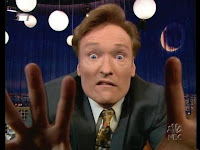 I feel so many pressures to opine on important social issues that it pains me whenever I have to stoop to trivial pop matters. But the blown calls on Jay Leno’s return compel me to speak up.

Let’s cut to the chase:

In two weeks/two months/two years, it will be like it was before Conan moved to The Tonight Show. Jay will still be on top by margins large enough to madden Letterman and his supporters.

Jimmys Fallon and Kimmel will continue to perform to numbers equivalent to large family reunions and Craig Ferguson will quietly continue to put on the best show of the whole bunch.

And people who like third or fourth ranked Conan will continue to be furious that the rest of us don’t appreciate his apparent genius.

We live in times of such jaded partisanship we feel forced to take sides in silly talk show wars. Really, who cares?

I guess most late night viewers are like me in that they aren’t. I usually start dozing off after a 1993 Seinfeld rerun I’ve already seen 49 times and still enjoy.

If I’m insomniac enough to watch anything I enjoy watching Jay. He does about three times the number of jokes that Dave does and most of them make me laugh.

But I’ve not sworn a cult-like allegiance to him. If Dave has better guests or has made news for something in his unseemly personal life to make him even crankier than usual I’ll tune in.

Late night is no longer something we all need to see to get the jokes the next morning around the water cooler. For that we have the internet.

That’s why I shake my head at the predominating criticism of Leno’s return.

Listen, if you revived sainted Johnny Carson and set him behind the desk, he’d be joking about the same topics.

It’s what they all do. I’d be disappointed if they didn’t.

The hostility all the other hosts unleashed on Jay didn’t surprise me either. It galls them that they just can’t beat him.

It must make these maladjusted hosts nervous to know that, even after all the Leno bashing, executives at every network would throw them aside in an instant if they knew they could get Jay.

That’s why Conan was bounced. Go ahead and blame weak lead-ins, etc., but he failed to deliver any substantial audience over seven months, dog years in TV programming. They could have given him a year and it wasn’t going to get any better because -- and here’s a little secret -- the guy’s just not that funny.

He can’t interview. His jokes are no better than decent and his sole genius seems to be the ability to project shrill facial gymnastics while doing bizarre mime impressions involving his nipples.

Rely on too much on those dubious skills, as Conan does, and you’ll alienate as many viewers as you impress. Ask Jim Carrey.

This will infuriate Conan fans who have become like devotees of tedious jam bands. They’ll argue that we don’t recognize the sheer brilliance of the composition and if we’d just give it another 18 minutes we’d appreciate the pop.

They don’t understand that most of us are perfectly satisfied with the snappy time it takes Tom Petty to sing “American Girl.”

To me the man who looks the worst in all this is Howard Stern. He was telling Harry Smith that the thought of Leno makes him vomit and that he prefers Letterman because he has so much “integrity,” a word Mrs. Letterman might not have used.

And he says Leno’s Jaywalking and other comedy bits were Stern originals Leno lifted.

That last claim reminds me of a “Simpsons” episode where Krusty the Clown becomes enraged at the sight of some other hack comic doing one of his signature acts. Krusty says: “If that’s anyone but Steve Allen they’re stealing my bit!”

So there you have it. Now I hope I can get back to writing about the important stuff.

Like how the instant chickens start laying Cadbury eggs I’m going to become a chicken farmer.

I wonder if Howard Stern thought of it first.
Posted by Chris Rodell at 12:11 PM

That IS a pretty good line. Craig Furgison is the best of them all! I just wish he was on in one of their time slots so I could stay awake to watch.

Yes, it is a good line, if I do say so myself (or at least in agreement with your discerning tastes!). I'm with you on the earlier time slot, too, Char. We usually tape him on Mondays cause we love headlines.

But if I had time I'd tape the monologue and watch it in the mornings.