This blog a Pittsburgh 'best of.' No kidding. 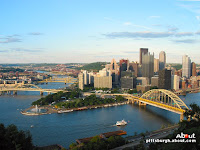 Pittsburgh Magazine's new website flatters www.EightDaysToAmish.com by naming it one of the five best blogs of The ‘Burgh (*).

See, both were given by demanding authorities.

In the same year that I got the best dad beer mug from my girls, 9 and 3, they’d also called me at various times, the “World’s Meanest Dad,” “World’s Dorkiest Dad” and “World’s Stinkiest Dad” (and that last one really hurt).

Either they couldn’t find beer mugs heralding those designations or I truly am the “World’s Greatest Dad.” Why would a $5 beer mug lie?

As for being one of the best blogs in The ‘Burgh, well, I couldn’t be more pleased. It’s a significant promotion for an aimless blog with no evident mission, no budget and certainly no income. Even more remarkable is that it’s produced by a man so devoid of ambition he’s held only three salaried jobs in his entire adult life and one of them was at the Pizza Hut.

To be named best of anything in Pittsburgh is, to me, a significant achievement. I think it’s the best city in the world and can cite survey after esteemed survey to back the boast.

What’s even more surprising is that my blog has absolutely nothing to do with Pittsburgh.

This is key and why I justify saying it’s one of the five (*) best blogs when the magazine lists 14 others.

My breakdown immediately dismisses any blog that includes some variation of Pittsburgh in its title. It strikes me as just a tad too butt-kissy. Like if I capriciously changed the name of mine to “Eight Days To Pittsburgh” (a bit south of Guadalajara) just to score hometown points.

So removing blogs with “Pittsburgh” named derivatives bumps me clear up to number three. The listing appears alphabetical, but that could be coincidence.

But insinuating mine is among the top three seems more pretentious by two notches than saying I’m number five and I don’t want to appear greedy.

Experts say a successful blog ought to identify its target readership in the title. My www.EightDaysToAmish.com defies that convention as it seems to court the percentage of Amish men and women who access the internet to find stories about things like getting high in hammocks.

My chosen blog title is so confounding the Pittsburgh Magazine editors decided against even using it. They list only my actual name. I like it. Seems to add panache among the other worthy honorees.

Point of etiquette: I sent congratulatory e-mails to most of the others listed and proposed a link swap but didn’t hear back from a single one of them.

See, Pittsburghers can be a tough crowd.

Maybe they collectively feared I’d engage them in windy sermons about why they, too, should be eight days to Amish.

I ought to try that one day. I can be pretty persuasive and the world might be better off with a few more e-Amish.

Who knows? Maybe with a snappier name, I might be “best of” in western Pennsylvania places like Uniontown, Cranberry and -- who knows? -- maybe even Altoona.

So to the editors of Pittsburgh Magazine, I say thank you. Thank you for including my blog on your “best of” blog roll and for listing things in a way that allows me to shamelessly declare mine is a top five.

And, by the way, thanks to my parents for not naming me something like Zeke.

Just one question: When can I expect to get my beer mug?
Posted by Chris Rodell at 9:16 PM

Congratulations and thanks for another laugh. It's a good thing, too, they didn't alphabetize by last name.

Excuse me, but do I know you? Have we met? I don't think so. How wonderful it is that a perfect stranger parachutes into my little blog and brightens my day with an out-of-the-blue compliment.

Someday, and it won't be long, there will be an app that'll let me zip over to you and give you a five-second hug that, I hope, will make your day the way you've made mine.

Thanks, Rachel, so much for stopping by. Until the iHug app arrives this will have to do: Have a great day!

Congratulations! I like the way you justify the top 5 move. That is my kind of thinking.

No, we haven't met. I'm Rachel; hi! (insert little wave here) I can't remember exactly how I stumbled across your blog, but I liked the humor of it and decided to stick around. Serendipity, truly. Incidentally, thanks for wandering over to my blog. It isn't one bit funny, but I have fun with it anyway.

Well, it's so kind of you to check in with a friendly hello. As I'm sure you know, building a blog from scratch really takes a lot of dedication -- not to mention gall. So when you make a new friend like you, it's very rewarding. I hope I can keep things fun and lively for you.

And don't worry about making Freestyle Foodie funny. Good food doesn't need to be funny. It just needs to be good food. Keep up the good work and I'm sure your readership will continue to grow.

I enjoyed your informative post. Thank you for sharing. You can also read our blog : Beer mugs