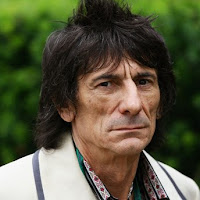 Lost in the holiday tumult is a story that to me is more culturally significant than gift giving, Santa and all those vain prayers for peace on Earth and blahbiddy, blahbiddy, blah.

And to think this was the year I fretted that our 9 year old might ask me if Santa was real.

This is bigger than that.

The man who will forever embody “Sympathy for the Devil” has become a man of wealth and taste.

Please allow me to introduce the new Mick Jagger, the nag for perhaps the only Stone now worthy of the band’s debauched legacy, Ronnie Wood.

First a little background. Wood, 62, has been a Stone for 35 years and Mick, Keith Richards and drummer Charlie Watts still call him the new guy.

The original Stones got together in 1962 and immediately began cultivating a Satanic image so wanton that church leaders who thought the cherubic Beatles were depraved began spontaneously combusting in their pulpits.

See the point? They weren’t posers. They were living the life. And it was all set to a really snappy beat.

For my money, the greatest Stones song of all is so filthy it’s becoming lost to all but the most dedicated fans. That’s a song known as “Star Star,” a title that was sanitized so it could be included on 1973 album, “Goat’s Head Soup.”

As anyone who’s heard just the first 46 seconds knows, the real title features the spectacular profanity that still draws hundred thousand dollar fines whenever it blisters the ears of FCC puritans.

Yeah, I heard about your Polaroids!
Now, that’s what I call obscene!
Your tricks with fruit were kinda cute, I’ll bet it kept your (female body part) clean!

And at the center of it all was the greatest frontman in music history, Mick Jagger.

Every lead vocalist in every rock band ever since has had to decide to either mimic Jagger (impossible) or just stand there (bor-ing!). This is the case with even mega-successful rock bands like Aerosmith.

In fact, Jagger once stole a girlfriend from Tyler after raising this philosophical gem: “Why would you want to be with that fake Mick Jagger when you could have the real thing?”

That all suddenly seems like a long time ago. Since 2003 Jagger, a man whose illegitimate offspring (seven children by four women) outnumber his known charitable contributions (zero), has been known as Sir Mick. Almost overnight, he’s become the epitome of posh society.

And that apparently means he doesn’t want to consort with guys like Wood. He seems so taken with the establishment it’s surprising he somehow still manages to consort with himself.

As for Wood, he left his wife of 23 years for 21-year-old Ekaterina Ivanova. Here’s her take on how they met last year in a west London club:

'I sat next to him with a cigarette and dropped some ash on his trousers. He said, "You've ashed on me trousers.’ I looked him up and down and said, ‘I don't give a f**k.’ He just went, ‘I love you.’ Basically I was rude, he was kind of sleazy and we kind of bounced off each other.”

Now come reports that Jagger is holding an intervention of sorts for the now a-drift Wood. He’s telling him that unless Wood straightens up he’s going to be bumped from the band.

He must mean business. We all know how hard it is to find unkempt alcoholics who can play guitar.

I keep trying to wrap my brain around Jagger lecturing Wood on polite behavior. It would be like me advising anyone to be more industrious.

Now’s the point when less motivated writers would reach for a cliche conclusion based on some popular Stones title like, “I guess Ronnie can’t always get what he wants.”

Not me. I’m going to stop here and will not resume until I’ve conjured a zippy punchline involving Jagger trying to recruit Tiger Woods to replace Ron Wood.

Until I do, please go out and try and do something industrious.
Posted by Chris Rodell at 4:11 PM