The King-sized Monster in Maine 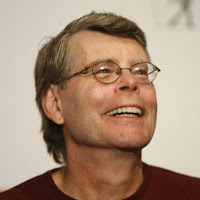 We vacationed there as kids and it was where my wife and I enjoyed our last child-free frolic.

But I’ll never return to Maine. A three-headed monster lives there and his realm is populated by drug addicts, adulterers, cutthroats and a host of garden variety geeks and idiots.

And those are the good guys.

I already feel like I’ve met every single person who resides in Maine -- and I’m only on page 519.

King, 62, has sold more than 350 million copies of books under his own name and those issued under the crafty pseudonyms Richard Bachman and John Swithen.

He is the literary equivalent of an earth-devouring monster. Right now he’s killing my time.

I’d been looking forward to reading the 1,074 page book. I hadn’t read a King offering since “Needful Things” (1993) and thought this epic would be a nice break from the history and biography that so enriches my life.

Like most of the world, King’s left an indelible mark on me. For me it started with Pet Sematary, as horrific as anything ever conceived by Poe, Hitchcock or Sterling, the Holy Trinity of creative American horror. I remember relishing “Salem’s Lot” the night after my last college final was completed and I was free to read whatever I wanted.

I remember swapping “The Dead Zone,” “The Shining,” and “Misery” with my old man and sharing our exuberance of stories well told. My wife and I raced each other to book stores to get the monthly installments of the wonderful chap book series, “The Green Mile.” And we both loved his Bachman book, “Thinner.”

I guess I stopped reading King when he started writing books faster than I could read them. Some sources put his total at 73.

I can think of maybe five things in my life I’ve done more than 73 times. In fact, other than golf, reading good books, fun time with the kids, attending sporting events and lovey-dovey stuff with the missus, I have trouble thinking of things I want to do 73 times.

Lots of stuff -- voting, commuting to work -- just gets boring after 25 times.

And that’s what had happened with me and King.

He started losing me with “It,” an otherwise compelling tale that craps out when the villain is revealed to be -- spoiler alert -- a great big scary spider. Oooh! My 3-year-old on a sugar high could have come up with something more plausibly frightening.

Heck, my 3-year-old on a sugar high is more plausibly frightening.

So now I feel marooned halfway through a book that’s more dense than three stacked Bibles.

I need to find out if the people of Chester’s Mill ever emerge from the big dome, how it got there, who’s to blame and who’ll be slain without mercy or taste.

At this point, I hope they all do. King has made the entire population of Maine part of the cast.

And there’s something objectionable about every one of them. His books make the whole state seem like it’s filled with a bunch of reactionary jerks who, ayuh, confront each supernatural challenge with either dull-witted immobility or vigorous criminal mayhem.

I’ve lost count of the rapes, the murders, the assaults and criminal lawlessness taking place in the town -- and that’s just by the police officers.

The narrative is so plodding I’ve become distracted by casting which B-list actor should play the leads in the eventual miniseries (I say Ashton Kutcher as Col. Barbie and Dick Cheney as Big Jim Rennie).

I don’t think the dome book would have been published in its existing form by anyone but King. But no publisher or editor at this point can tell him he’s off track.

So he should take it from me. He needs a decade-long horror sabbatical so he can return with another series of timeless novellas like the four included in “Different Seasons,” his most satisfying read.

That 1982 collection yielded two of the best human interest movies any of us has ever seen: “Stand By Me” and the magnificent “Shawshank Redemption.”

Many people are often surprised but the outstanding 1994 Tim Robbins/Morgan Freeman prison flick is faithfully based on a Stephen King book.

He needs to get back to telling stories about people and daily struggles that make the supernatural seem so contrived.

Besides, what could be any scarier or more supernatural than what’s just taken place?

I just devoted about an hour to giving career advice to Stephen King.
Posted by Chris Rodell at 9:37 AM

I hate to tell you but if you're already having trouble with the book, you really won't like the ending. I didn't. And I consider myself almost "fanatical" with regard to King's books. Okay, maybe not that bad, but I usually do enjoy his writing. I was severely disappointed with this one, which makes the second recent book by him I thought was less than awesome. I may pause before I try a third plunge into his worlds.

Argh. Now, I'm really sorry I got into it. I guess I just remember so many wonderful hours spent in King's world. This seemed like it could pull it off.

I think to some degree we are all fanatical King followers. He's given us so much it's almost like he's a national treasure.

I really think he needs a good editor to tell him when enough's enough. He should do one book every two or three years. The writing in the Dome feels kind of rushed to me.

Happy New Year, Eric! Always good to hear from you. I hope 2010 is a happy and prosperous one for you and your loved ones.

http://roostershamblin.wordpress.com/ would you please spend a few minutes checking out my blog. I am a farmer who has been raising over 50 breeds of chickens for the past forty years.

I am reading old blogs.... Cant Believe you left out "The Stand". With the Flu scares last year I expected to see Randall Flagg outside my door. Once you start reading that book you get paranoid when anyone around you coughs or sneezes.

Thanks for stopping by to catch up. Hope you'll enjoy a bunch of them. I appreciate it.

"The Stand" didn't make much of an impression on me, as I recall. It's been a long time. I do remember Randall Flagg as a good villain. Maybe I should reacquaint myself with the story.

Last one I really enjoyed as "Needful Things" if you can believe it.