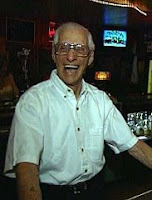 I don’t know what this says about me as a person, but I have more soulful revelations in taverns than I ever do in church. Happened again Saturday.

That was last call for Angelo Cammarata, the man who is arguably the world’s most historic bartender.

Says me and the Guinness Book of World Records.

Guinness declared the 95-year-old Cammarata the world’s longest serving bartender way back in 1987.

Ang poured his first beer at his father’s grocery store when he was 19. It was the stroke of midnight on April 7, 1933, the exact instant that President Franklin Delano Roosevelt told a thirsty America that -- hallelujah -- killjoy Prohibition was over and so were the days of Cammaratas selling groceries. His father saw the future and it was sudsy.

Ang's been pouring them ever since. There may be older bartenders, but none who’ve tended longer. He’s known no other job.

The streak came to an end Saturday. Cammarata’s in the West View neighborhood near Pittsburgh, is closing for health reasons.

His 59-year-old son John suffered a heart attack last year and can no longer keep up with the demands. The family sold the bar.

I wrote about Ang in 1999 for National Enquirer. This man born in 1915 (he remembers seeing disabled Civil War veterans in military parades) holds a sort of world record for me, too, as my most evergreen story. Every year he kept persevering, I’d pitch him to someone else, eventually landing his story in Playboy, Men’s Health and a handful of other publications.

Ang was the final exam in 2006 when I taught a non-fiction writing class at Point Park University.

I wanted to see if the students had learned to detect a magnificent story where none appeared to exist.

Tell a group of 20-somethings that they’re final grade will be based on a two-hour full-class question-and-answer session with a 92-year-old man and three-quarters of them will look like they want to heave their holstered cell phones at your head. Most of us will make little more than polite conversation with someone that aged.

Not when a final grade’s on the line.

I sat and listened to 15-minutes of perfunctory questions about where he lived (“West View, north of Pittsburgh”) and what he did for a living (“I’m a bartender”), before one exasperated student blurted out impatiently, “Just what makes you so special?”

That’s when the place began to fill with magic.

He told us about what it’s like to be married to the same woman, Mary, for 70 years (and that sounds like a record, too), that beer once cost a nickel, that he’s sympathetic to today’s kids, and that Negro League legend and Cammarata customer Josh Gibson was a pretty cool dude.

He told us about the simple joy of making a new friend, that he considers himself living proof that second-hand smoke dangers are overrated and that he believes he’s the luckiest man in the world.

Afterwards, we all went to his bar and he poured us beers. If nothing else, at least some of those students will look up from text messaging and wonder about the life experiences of that unassuming stranger at the bus stop.

CBS news reporter, Steve Hartman was there. He’s does the Evening News slice of life pieces and that wonderful “Everybody Has A Story” segment. I’ve always admired his work and was thrilled to see he’d nosed his way to one of my favorite subjects.

I told him my favorite Camm quote came after I asked him to pinpoint the best years of his life. Camm’s response: “For me, it was the years from when I was 40 to about 75. Those were just really great years.”

I’m truly blessed to have him call me a friend.

He went out of his way to introduce me to his family and all the friendly customers who consider him part of theirs.

That this gentleman always duplicated that sort of lavish treatment with each and every customer does nothing to diminish the honor.

I didn’t go to church the next day. Not that I was hungover. Far from it.

I didn’t go because I believe those two hours in that bar equalled a lifetime’s worth of proper religious education.
Posted by Chris Rodell at 1:04 PM

Great story. I am jealous however, because this bartender sounds like a truly interesting person. There are quite a few out there, but we usually miss them as we muddle along in our own tired lives. Stories like this are what help liven us up from time to time, so thanks.

Thanks so much, Eric. Good to hear from you. You make a good point about these people being out there under our noses. I wish I had a metal-detector-like device that would just point them out. This guy was easy to find because of his notoriety. Others, not so.

Good luck with your search and your writing.

What a wonderful story. We take time that we me the strangers for granted. This is exactly why I love holding up that friendly sign above my head and talking to everyone. Thanks for the great story. -- RoShelle

Hey, thanks, RoShelle. I wish everybody on the planet could have a chance to meet Ang. Who knows? Maybe they will. He's still going on strong!