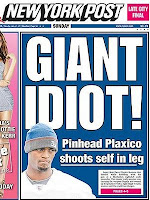 For the good of the economy and the preservation of common sense, we need to urge immediate freedom for walking stimulus package Plaxico Burress.

I resent how news events keep forcing me to become more and more liberal. Really, by now I ought to be a moralizing conservative who is so socially uptight that the sticks up my butt have sticks up their butts.

But news that wide receiver Burress, 32, is going to prison for two years agitates the Abbie Hoffman in me.

Two years in prison? For shooting yourself? Sure, the errant bullet that struck his thigh could have killed an innocent stranger, but it happened in a New York nightclub pulsing with bubble-headed hipsters and, really, would we have missed just another one of those?

I’m not going to argue about celebrities and their need for lethal protection, trouble magnet athletes going to places they should not, and the arbitrary enforcement of chaotic gun laws.

Instead I’m going to focus on what it means to society to incarcerate Burress, who in 2005 signed a $25 million contract to play football for the New York Giants, until 2011.

For starters, the only people who are sadder than us like-minded devotees of judicial sensibilities are people who make things like $20,000 Chinchilla coats.

As a fan of the Pittsburgh Steelers, I’m more than a little familiar with the man and his extravagant tastes.

He was the Steelers first pick in the 2000 draft and played here through 2004. The fans weren’t quite sure what to make of him because -- and this is bound to sound prejudiced -- he looked to us like he walked around in a happy atmosphere of latent marijuana smoke.

For you non-sports fans, this is a not uncommon meteorological phenomenon surrounding young black men from impoverished backgrounds who are gifted enough earn multiple millions in their early 20s.

Upon signing his first contract, Burress endeared himself to me by acting like I would have were I in the same giddy situation. He became a party.

He was never surly and his teammates loved him.

I was happy for him when he scored the winning touchdown in the final seconds of the 2008 Super Bowl, and sad when he accidentally shot himself in the leg (although I confess the sadness was preceded by an unseemly bout of chuckling at his foolish clumsiness).

And I was very sad when I learned his 2-year-old son, Elijah, would be deprived of his father until 2011, and that his pregnant wife, Tiffany, wouldn’t have the father of her baby with her in the delivery room.

All that for shooting yourself?

He’s in a jail for an accidental crime even his most bitter critics will concede will never happen again.

And it should not deprive luxury furriers of one of their few loyal customers in these times of economic uncertainty.

Here’s what ought to happen. On November 23, the judge should summon Plaxico to his court and say:

“Mr. Burress, the taxpayers of New York have already spent tens of thousands of dollars incarcerating you for 10 weeks. It’s money that could be spent restoring the hours for endangered libraries, putting canned goods on the shelves at food banks or providing flu vaccines for the elderly.

“You've now had a taste of what prison's like. Never forget it. Now, Happy Thanksgiving, I’m going to let you go home today. You’re a free man. But your freedom isn’t going to come cheap.

“In order for you to remain free, you’ll have to prove to this court that you’re spending at least $10,000 a day.

“Your pregnant wife is responsible for half of that. I think $5,000 a day is a fair price for all the worry you’ve caused the delicate miss. Her job is to stimulate the economy by purchasing whatever she wants. If she’s only spent $4,500 by 4 p.m., then she’ll need to call up a florist and have them send $500 worth of posies to a local nursing home or hospital. Florists need to eat, too.

“Your new job starting on Monday will be to become the black Santa. You’re going to have to spend $5,000 a day helping the underprivileged, the people who need shoes, groceries and sweaters when the wind blows. The need, as you’re about to discover, is great and sadly goes unfulfilled for too many.

“Now, go home, enjoy Thanksgiving with your family, and say a prayer of gratitude that you live in a country where the law is not so rigid that it can’t turn to creative solutions where everybody wins.”

Plaxico shot himself, but the judicial system is committing a far greater crime.

First of all, he probably was walking around in a fog of marijuana, me thinks many pro athletes do.

Secondly, even though I believe that we are opposite sides of the political spectrum, the courts did make a mistake in sentencing him to prison at all. Is it the tax-payers fault he's stupid enough to carry a loaded gun? I think not.

Keep up the great work on this, it is a ton of fun to read.

Agreed, Paul, and thanks so much checking out the blog. I'm proud to have you as a reader.

Yes, I've drifted left since the impeachment trials. Didn't like that stuff. But I try not to be too shrill about it. That's annoying, I know. Kyle keeps reminding me whenever I do!

And I'll be ever more mindful about it knowing I have another right-sided reader thoughtful enough to stop by.