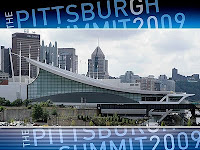 I wish at least some of the world’s most powerful leaders had stopped by my house for breakfast during their historic visit to Pittsburgh. I’d labored over a delicacy that, I swear, can’t be found anywhere else on earth.

I spent about a total of three hours sifting through two big barn boxes of Lucky Charms to separate all the loathsome toasted frosted oats from the succulent marshmallows.

It was tedious and blasted a huge hole in the productive part of my week, but the result was one full box of just the good stuff (and two bags of flavorless toasted oats I’ll probably wind up tossing). Friday was our daughter Josie’s 9th birthday and I wanted to surprise her with a box of nothing but magically delicious charms. She loved it.

I did it because I want her to feel special and because it makes me feel like I’m being a good dad, even as I acknowledge I’m a terrible provider, disciplinarian, and useless when it comes to helping out with things like third grade math homework.

• Today’s protesters are a bitter disappointment to those of us who watch the news hoping to enjoy some coherent anarchy. After three days of nearly non-stop reports about their actions and demands, I’m still unsure what the hell they were protesting.

If you can’t wrap your mission around a tuneful march (“Hell, no, we won’t go!” or “Hey, hey, LBJ, how many kids didja kill today!”) you might as well just stay home and tap out pointless tweets about your petty furies.

I’m a happily married heterosexual, but if a flamboyantly dressed column of poodle walkers marched past my house shouting, “We’re here! We’re queer! Out of the closets and into the street!” I’d turn off the football game and get in line because it’s just such a snappy slogan.

• Of course, the Andy Warhol Museum made a big splash for hosting Michelle Obama and the rest of the spouses. Pittsburgh likes to show off the museum because they think the connection to a guy who left the city about 40 years before he died and never returned somehow makes us a kind of hip that surprises visitors.

It does not. What makes us hip are bars like the Rosa Villa that used to be right across the street. Before it closed in 2006, the Rosa Villa was a notorious mob hangout decorated with black and white pictures of bloodied boxers. Jimmy, the bartender, used to box, too, and spent his advanced years tossing haymaker insults at customers and providing a bright contrast to the hipper shades floating in and out of the museum dedicated to America’s least talented artist.

I once asked Jimmy if he’d ever set foot in the Warhol.

• Had I been a more sensible sort, I never would have quit newspapering back in 1992. I’d have a stable job and routine work. That means I would have spent my weekend swamped with G-20 assignments.

I don’t have benefits, a paycheck or, heck, really much of anything to do these days, but I watched the news reporters in their coverage frenzy and am convinced I made the right decision that daily work of that sort just wasn’t for me.

I wouldn’t have wanted to have missed my daughter’s birthday party weekend to spend it dodging tear gas with smelly strangers.

• As you just read, I am critical of the protesters because of their incoherency. To be fair, I have no idea about the tangible results the leaders of the free world achieved here the last two days either. Not a clue.

• Pittsburgh’s lucky to have such a staunch supporter in President Obama. He’s clearly taken with the city and its people. He brought many of the most important people here to enjoy the city.

Next week, as they do every year, 10 of my friends from New York City are coming to Pittsburgh to watch a Steeler game and revel in the city’s bars and offbeat activities.

Guaranteed, we’re going to have more fun than anyone from the any of the G-20 delegations, all without the benefit of a cushy expense account.

• I for years have been trying to convince Pittsburghers to refer to the Warhol as the A-hol Museum.

It hasn’t caught on, but I remain hopeful it will.

• I bust with pride that Pittsburgh got to host such a high-profile international event. It’s a magnificent city with stunning views and friendly people who know how to work hard and play hard.

If you’ve never been, please come and see for yourself. And be sure to stop by for a big bowl of Lucky Charms like the kind you’ve only dreamed about.
Posted by Chris Rodell at 12:01 PM

As a product of the Cathedral of Learning, I agree. No experience however with Lucky Charms. Lovely writing, as always.

And I forgot to mention that I would get everyone together for an Imp n' Arn. That's the way you solve problems.

Ah, whatta Dad, to have thought of that. You're right, she'll probably always remember that. Too bad that your wife will be p-o-ed because you one-upped her present! Just sayin'.

Did you hear? During one of the protest riots (either in Shadyside or Lawrenceville), someone was running through the mob in a Pittsburgh Penguin hockey shirt while carrying a fake Stanley Cup like it was a parade to celebrate the win! Classic!

The Lucky Charms was a great idea! Not many dads would think to do such a thing. I'm sure she'll remember that for the rest of her life.

Bruce, I didn't know you had Pittsburgh roots. Cool! Let me know if you're ever in town and we'll definitely imp 'n' arn on the South Side.

Char, I have a long, steep climb to ever usurp Mommy in the eyes of our daughters. They're crazy about her and keep me around for comic relief.

Michelle, Love the Pens fans! Wish I'd have seen it to include in the post. You're right. That's classic.

So glad to have you guys as 8Days2Amish readers. Thanks!