Saving the world with global worming 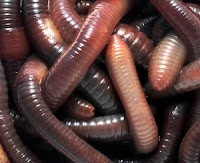 I’d planned on spending Earth Day scattering dense trash on pristine lands and in deep lakes where the environmental obscenities will likely linger for centuries.

Some future explorer would find them in some distant age. She may shake her head at my carelessness and exclaim, “Wow, someone with a really nasty slice used to roam these lands. We’re miles from the nearest golf course!”

It is my Earth Day custom to bang Titleists deep in the western Pennsylvania forests. I lose about four or five golf balls every single time I tee it up. I putt good, my iron play is strong, but I can’t hit a straight drive to save my life.

Most people don’t consider lost golf balls trash. I do. I can’t sleep the night before I golf knowing there’s nothing I can do to prevent defacing Mother Earth with my dimpled, non-biodegradable spheres.

Maybe I take things too seriously.

Like the saving the planet. I take it very seriously.

I aim to reduce, reuse and recycle everything. I vowed last year I would never step over another piece of trash. Now I carry a recyclable plastic bag with me on my walks and usually have enough cups, wrappers and papers to get about half a bag full.

I could accumulate more if I wobbled along in a drunken sort of weave into the bushes and gutters, but that would take too long and would reduce the happy time I spend in the bar developing a true drunken weave the old-fashioned way

Still, I know I could do more. I’ve read that the average American discards 28 pounds of trash each week into our bulging landfills. Our family is way below that, but not near the average household in Oslo, Norway, where they produce just four pounds of weekly trash.

Four pounds! What, is Oslo populated entirely by Keebler elves?

Still, even they are pikers compared to the world’s best recyclers. For every single pound of trash you and I produce, this trash-devouring little superhero is capable of recycling it into an equivalent amount of something useful and nutritious.

I did a story about the practice of vermiculture four years ago and immediately became enthralled with the ambi-sexterous red wiggler worms. The tiny slimies simply fascinate. It takes a trained eye and, I’d guess, an atomic level microscope, but every worm is a hermaphrodite generously bestowed with organs of both sexes.

As it was explained to me, “These worms simply live to eat and reproduce. Basically, the worm is just a mouth, anus and a microscopic little brain.”

I asked, given these base characteristics, how do red wiggler worms differ from the typical radio talk show host.

“Well, the worm actually contributes some good to society. About 45 percent of all our waste stream comes from food and paper products, both of which are compostable materials. Worms can convert these common waste products into nutrient-rich soil fertilizer to energize your gardens.”

I was sold. I got a little bin, a softball sized ball of 1,000 little wigglers and soon our family started putting apple cores, banana peels, lettuce scraps, tea bags, potato peels, etc. into the bin along with showers of shredded newspapers. The warm worm poo makes great fertilizer.

So now when strangers ask what I do for a living, I always answer “I’m a worm farmer.”

And it’s true. Sure, I do a lot of writing, but there’s rarely even a penny of commerce involved in the exercise. I used to say blogging was the journalistic equivalent of running a lemonade stand until I realized that even 8 year olds know enough to charge a quarter for a glass of lemonade.

Worm farming is a productive pursuit that reduces vile pollution. Some critics would argue blogging is the exact opposite.

So instead of golfing on this Earth Day, I’m putting on my worm farmer bib overalls and am heading to Baggeley Elementary School to teach my daughter’s second grade class about the joys of vermiculture or worm farming.

I’ve done it the past couple of years and it’s always a joy to see the kids fussing over the bin full of worms as they frolick amidst all the rich worm poo.

But it’s not all fun and games. I don’t let the kids get too out of hand.

And, take my word for it, no one wants to see a hermaphroditic red wiggler get all excited in front of a classroom full of second graders.
Posted by Chris Rodell at 12:09 PM

Boy, I really wish I could see at that school!

Yes, it was chock full of happy panic. Those kids were great fun. They loved the worms and didn't eat a one!

Sheesh! And I thought I had problems with a cookery class for tiny tots, when I used to help out in school when my kids were young!