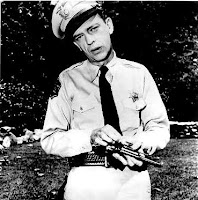 But the carnage this weekend was too gruesome to ignore. A distraught dad shot and killed his five kids in Graham, Washington; a Vietnamese gunman killed 13 fellow immigrants in Binghamton, New York; and here in Pittsburgh we are devastated by the deaths of three police officers who were shot by a 22-year-old far right gunman who believed President Obama is out to take his guns from him.

Like the abortion wars, there is no middle ground between these two bitter camps. With them, it’s either all guns or no guns.

That’s why I first proposed in 2003 a perfectly reasonable solution that was called by one gun control expert as the first original argument he’d heard in a lifetime of dealing with the debate. Here it is:

Every one over the age of 18 gets to carry a loaded gun, holstered or concealed, any where they want, any time they want. That means every place people gather -- offices, churches, airplanes, sporting events -- plenty will be packing.

But you get just one bullet. One bullet per person.

Use it or lose it and, in addition to any existing criminal charges, you need to go before a judge and explain what happened to your bullet before he or she decides whether or not you get another one.

The bullets are the killers and the astronomical number of them invariably leads to deadly recklessness.

One Minnesota firm, Alliant Techsystems, boasts on its web site (www.atk.com) that it makes up to 600 million bullets each and every year all by itself.

The most hateful, paranoid person on the planet would be hard pressed to enumerate 600 million people in history who really deserve to be shot.

An attorney once told me there are three types of homicides: unnecessary, justifiable, and praiseworthy. If everyone was entitled to just one bullet, many of those serving hard time at tax-payer expense for unnecessary homicides would today be productive citizens.

The jails are full of otherwise good men and women who in moments of drunken or drug-fueled rage emptied guns at victims who didn’t deserve lethal ventilation.

But if a drunk or crack fiend had just one bullet, most of them would miss their targets and they’d be subject to the laws of the land.

Judge: “Why did you shoot your bullet at Mr. Smith?”

Mr. Wesson: “Well, it sounds silly, but I didn’t like the way he was looking at me.”

Judge: “Is that any reason to shoot a man?”

Judge: “Well, it’s a good thing you missed. I’d advise you to stay home with your kids instead of engaging in barroom staring contests. Understood?”

Anti-gun people are loath to admit it, but everyone’s manners become more refined in the presence of a loaded gun. Former Defense Secretary Donald Rumsfeld used to quote Al Capone, who was known to say: “You can get more accomplished with a kind word and a gun than you can with just a kind word.”

The crossfire of pro- and anti-gun groups has become the rhetorical equivalent of trench warfare. The mindsets are so ingrained that any attempt to breach the deadlock with fresh thought is automatically shot down -- even by people who are organizationally opposed to shooting anything.

Back when I came up with the theory, I spoke with Nancy Hwa, at the time a representative for the Brady Campaign to Prevent Handgun Violence. She said, “Our theory is that even one bullet can kill someone.”

True, I countered, but doesn’t it stand to reason that fewer people would be shot if everyone had just one bullet?

“Well, yes, but . . .” she began reciting familiar arguments before realizing she’d descended into what she called “wonk babble.”

“Sorry, but it’s hard to think about new ideas.”

Out of fairness, I next had to call the National Rifle Association, the scary, dour people with the bumper stickers that are always alluding to their “cold, dead fingers.”

I remember being caught off guard by NRA spokeswoman Kelly Whitley’s reaction.

She burst out laughing. And she continued to laugh. It was such a joyful laugh that I felt a rush of sweet affection for this unseen, distant stranger. It had me hoping nobody had to pry anything from her cold, dead fingers for many, many happy, productive decades.

I called back the next day and she was still laughing. More than five years, she still hasn’t called me back with a substantive response. I imagine her sitting there still laughing maniacally in between regurgitating the same tired Second Amendment arguments that do nothing to stem the carnage.

One bullet per person might seem like a silly idea, but there just aren’t any new ideas coming from either side, certainly none that at least one person in the pro-gun lobby finds so ironically disarming.
Posted by Chris Rodell at 10:37 AM

Just flying by to say I lurved your guest post at Kim's place today. Well said, ditto, and kudos!

I loved your guest post too (and Angie didn't even tell me to say that!). I wanted to come by and visit your blog. This post is great. I will join your crusade.

Thanks so much, Debbie and Angie, for popping by for a quick browse. It's great making new friends through old friends.