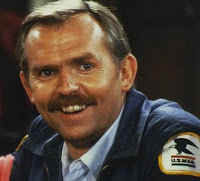 For the sake of mental convenience, I’m thinking of packing up the family, all our stuff and moving the whole shebang to Newton Falls, Ohio.

I’m in the midst of a comprehensive study about zip codes for pin heads. It’ll be two years ago in February that we moved one mile from near Latrobe, Pa. 15696, to postally proper Latrobe, Pa. 15650, and I still occasionally find my password-cluttered mind stumbling over the difference. It has me wishing I lived someplace where my zip had some zing.

Bond, Colorado, appears to be perfectly insignificant to the rest of the world, but how much publicity could it gain if someone with a puckish sense of humor bestowed them the perfectly obvious 00007? Today reporters from all over the country would be descending on Bond to write reviews that would appear under headlines like “Bond on Bond,” or “Licensed to Deliver, Bond 00007.”

Hilarious and brilliant. Such a rarity.

Alex, you've made my day. I admire your stuff and it's great to hear you're one of my readers.