Give me a break? Still not my turn 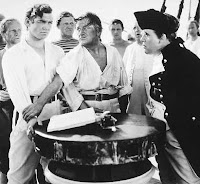 I try and think of this guy whenever I think I could really use a break -- and I think about that all the time.

Really, I thought this would all be a lot easier by now. I thought my novel would be published. I thought it would be a success and I thought I’d have to work and fret a lot less than I do.

Yet, fret and toil I do. To be more accurate, I fret that I’m not toiling enough. I don’t mind work. I love to do what I call “work,” which is talking to people and typing about what they have to say, and talking and typing isn’t real work. No one’s shouting at me. No one’s firing cannon balls in my direction. I’m not far removed from my dear loved ones or under constant threat of capricious violence.

That means my “work” is vastly different from the most unlucky able bodied blokes in perhaps the history of the sad, beleaguered working class. Those would be the press ganged sailors forced to serve in His Majesty’s Royal Navy during the 18th and 19th centuries.

The term press gang stems from roving bands of officers who’d prowl the English ports and pubs in search of men it could “impress” into endless or terminal service on behalf of the King. They did this by often brutal means. If the ship was departing by daybreak and they didn’t have sufficient crew, they were permitted to in effect kidnap any otherwise free man who looked like he could bail water, pull a rope or do menial chores on board a ship that could be sailing clear around the world.

I’ve always been fascinated by this aspect of maritime history. It amazes me that at one time men just like me could be sitting in a comfortable pub after a hard day’s work -- and I’m talking about them, not me -- never expecting their lives could be so cruelly and indelibly altered. Without even a moment to say goodbye to loved ones, they could one day be working as fishmongers or liverymen and the next morning find themselves bound for distant lands they never knew existed.

It would be like a gang of bluebloods storming into my favorite tavern, yanking me from off my bar stool and sending me against my will on a trip to someplace like Pluto. And, knowing my luck, it would happen just as I was reaching for a fresh beer (and, guaranteed, that unsipped beer would likely haunt me to madness as I lay marooned and dying on some deserted asteroid).

Nothing like that’s ever happened to me yet and I don’t expect it ever will. Still, I’m forever complaining about my sad lot in life. Work is often scarce, pay is low and widespread collegial regard seems to forever elude.

The leaves an even worse option, that my stuff just sucks. And those are the thoughts that keep me awake at night.

I used to pray I’d be successful, now I just pray God will slay all my ambitions.

And that’s a pitiful mindset. I know many aspiring writers who think I’ve got it made. And to many I do.

Still, I wonder if I was blind to any of the doors opening before me, if I was arrogant to sage advice and why I can’t seem to get a break.

That’s when I try and gain perspective by thinking of that poor bastard who was in 1707 press ganged to serve under Admiral Cloudesley Shovell on some of the most expensive and powerful war vessels of the early 18th century.

The histories I’ve read said the common sailor became alarmed that in heavy fog and respectfully warned that the ships were in danger of striking a shoal of deadly rocks.

Admiral Shovell was outraged as his impudence. How dare he, an unskilled and unschooled sailor, think he knew more about navigation than many of the King’s most agile seafaring minds?

In one of history’s greatest and most forgotten I-told-you-so’s, the very next day four of the mighty ships struck the same rocks about which the unknown sailor had forewarned. The ships promptly sunk and more than 2,000 men, including the imperious Admiral Shovell, perished beneath the waves.

But the sailor was never given his due. No one begged his forgiveness for not having heeded his dire warnings. Shovell had him immediately hanged without trial for his mutinous speculations.

Give me a break?