November Tweets of the Month! 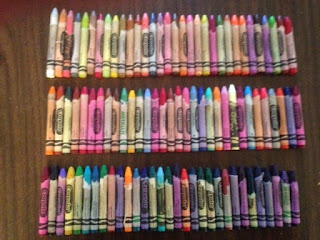 Hi! This above was from a couple years ago. It's a picture of my battle-scarred first box of crayons from when I used to wear every crayon down to the sorry nub. Note, the top row, far left: The caucasian crayon is hardly used at all. In fact, you can almost discern a spectrum from top to bottom, left to right, with the primary colors being heavily used ... Gosh, I really tend to dwell on crayon usage.

• I understand we're all hyper-sensitive about race issues these days, but I hope we never get to the point where my black brothers and sisters become blind to the humanity of my empathetic ice-breaker/greeting of "Whatchu talkin' 'bout, Willis?"

• On this Cyber Monday, I’d like to pay homage to our computer overlords by vowing to never again use the phrase “command” when it comes to me and computers. It’s more accurate for me to from now on call “commands” “suggestions.” #SuggAltDel

• I’m lately finding myself getting angry at my car. Its insatiable thirst for fossil fuel means it consumes gas even when it's not in motion. I foresee a future where "smart" cars only run when the accelerator is depressed. You know, like stupid golf carts have been for 60 years!

• It’s not uncommon for me to hear friends confide they believe I'll one day become a famous writer, but it won't happen until after I'm dead. I share this around the supper table and I can tell my dear loved ones are thinking, "Should we kill him now or just hope for the best?”

• Had an embarrassing lunch with an old friend last week. He wouldn't quit putting his hands on my knees. Everyone was staring. It got so bad I nearly felt compelled to put pants on.

• I’ll be speaking today to Ligonier Valley HS students about how to succeed in life ... and you thought mask mandates were controversial.

• On this day we as a nation should vow to never again say Happy Veteran's Day until we're certain we've done everything we can to ensure every veteran is happy. #VeteransDay2021

• Reuters headline -- "Russia/West in row over climate change solutions" -- has me worried ill-timed bickering over rising seas will result in all of us dealing with a different kind of row. (Picture of couple in boat rowing)

• One was one of history's most bloodthirsty tyrants. The other a humble tender of ovens. But they both bore the same name so there had to be a way to differentiate the two. That's how one became Atilla the Hun while the other Atilla the Baker.

• Spent a frantic 30 minutes this morning searching for misplaced car keys. Was so elated when I found them I'm vowing to lose them at least once a week.

• If a diplomatic rooster tries to avert a cock fight is it fair to call him chicken?

• Red & blue states are behaving like conjoined twins fighting over whose turn it is to use the penis they share.  They tolerate no compromise and revel in scorched-earth tactics that guarantee the only one who's getting screwed is one another.

• This Jake Gyllenhaall/TaylorSwift dust-up brings back some painful memories of my youth. To my everlasting shame, I once mistreated a beautiful young songwriter and without mentioning my name, she bashed the hell out of me in chart-topping song. It was 1973. The singer is Carly Simon. The song is "You're So Vain." And I was 10. But c'mon! Being 10 and dating Carly Simon! It was bound to go to my head.

• I suspect it’s universal for every region to have a neighborly punching bag to make fun of for perceived or obvious stupidity. It’s why N. Dakotans make fun of S. Dakotans, Ohioans mock West Virginians, etc. But is it truly universal?  And if so how often are we the butt of the jokes? Like is some alien wise guy on Kepler-23b entertaining his friends by saying, “Three Earthlings walk into a bar …”

• Here’s one the best brains at #COP26, guaranteed, won't think of: Hook every treadmill and exercise bike up on the planet to generators to produce the cleanest & greenest alternative energy known to man.

• Fuddy-Daddy: A male parent who wishes, goldarnit, TVs would go back to just 13 channels, that phones were still phone-shaped and that his adult kids still looked up to him the way they did when he was 32 and they were 4.

• When the end is near I believe it'll still be possible to buy time, but I'm pretty sure payment will involve an unforgiving sort of lay-away plan best described as “grave.”