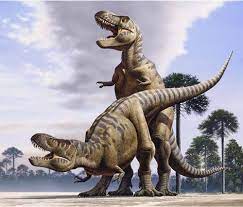 Some fathers talk birds ’n’ bees with their daughters. The wusses.

When I have “the talk” with my loved ones, we go big. We go Old School.

It all started when our eldest (she turns 21 Saturday!), asked me if I knew why the dinosaurs quit having sex. The question was class related

I gave it a moment of thought and speculated maybe the “Seinfeld” episode about the overdue library book was on. My wife and I have delayed romance for that reason on occasion. The “Bookman” episode really cracks us up.

I don’t know why she’s studying the recreational mating habits of Jurassic monsters, but I was immediately energized.

I’ve been consumed with thoughts of sex ever since I hit puberty, a biological condition from which I feel I’ve yet to emerge. But in all these years of thinking about sex, I’ve never once wondered how dinosaurs do it.

But when you think about the nuts & bolts mechanics of the mega-ton creatures you wonder how they did it without a fleet of forklifts and several dozen disposable teamsters armed with blanket-sized wet naps at the ready.

Apparently, paleontologists are stumped, too. I was told there are no fossils of dinosaurs mating, leading some paleontologists to speculate the lack of sex contributed to the dino demise. That would do it.

At this point, I must interject another pet peeve of mine, one that has to do with the word paleontologist, which is the study of dinosaur bones.

Here’s what one boner said about, well, another.

“The actual moment of copulation was probably very brief, to minimize the mechanical stresses on both partners. The male may have thrown one leg over the female's tail and used a relatively long, extendable penis to reach the female's genitalia.”

What? No foreplay? No poetry? No romance?

The idea of a candlelit dinner can be excused, given that the the invention of the Zippo lighter and other pocket fires was eons off.

That bit about the “long extendable penis” piques my curiosity. What’s “long” to a 40-foot creature? Was it comparable to a four-person kayak? An NFL first down?

Given the anatomical challenges of mating with a partner of such posterior girth, he’d need to be well-endowed to achieve copulation. Dinos have huge booties.

Probably because it is more relatable, caveman sex is even more fascinating.

It must have for one and all been a cruel existence.

True, all the carbon-based life forms had the biological opportunities to screw one another’s walnut-sized brains out, but that was for purely procreative reasons.

It’s the difference between making love and having sex.

For all intents and purposes man/woman have been having sex since the beginning of time. But we didn’t start making love until 1967 when women began to set fire to their brassieres. I can assure you that was the case in my conception.

I’ll be sure to keep you apprised of any further need to bone up on dinosaur sex.

And as any old boner will tell you, when you’re talking dinosaur sex there’s no better time when the bone is up.