Sept. Tweets of the Month 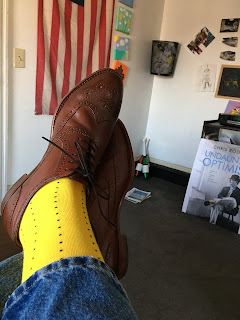 And here at the end of the month it is the customary time to post my wrap-up and ask the question, as I always do, geez, does anybody even read these?

If you can't live without them, sneeze! Really loud so I can hear and know you care.

Thank you! Have a great day!

• If a couple sets out to get hitched and guests agree it went off without a hitch, did it ever really happen?

• I’ve been a complete idiot for so long the adjective has lost all its meaningfulness. I now consider myself a mature idiot

• When Jesus brought Lazarus back from the dead, did Lazarus's father have to go through the whole buy-cigars-for-your-buddies custom and if so, did he try and get Jesus to pitch in on the cost?

• I sometimes wonder if Earth has antagonistic feelings towards its inhabitants, like if 2,000 or 3,000 of us get wiped out in some natural disaster, Earth doesn't sigh and say, "Ohhh ... now THAT feels better!”

• I never bother following orders when ever someone sassy tells me to go to Hell. I'm not being defiant. Just efficient. I know in this life sooner or later Hell comes to you.

• Women who purse their lips put their mouth where their money is.

• We live during a time when there is so much emphasis on visuals that the people who'd rather face the music now outnumber those of us who prefer just listening to it.

• I like that you can't spell the word "hear" without the word “ear."

• Exploding toilets may cause plumbers' lives to flush before their eyes.

• One of the most challenging aspects of fatherhood for  me has been to with a straight face extol the twin virtues of chastity and sobriety without ever once acknowledging some of the best times I've had on the planet involved gettin' drunk and making out with total strangers.

• As we perch on the cusp of the bewitching season, I know I'll every day be fated to wonder why beer and mirror rhyme yet devil and evil don’t.

• That a prairie state like Iowa can send to Washington a Senator named Grassley gives me hope that one day Wisconsin voters will be represented by a Senator Cheesey.

• It had a handsome leading man, an earnest sidekick and international intrigue, but there was something about Ohio Five-O that never caught on. Oh, and Ohio Five-O had scenic corn locales.