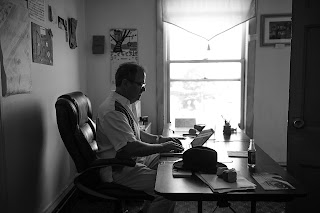 • If the love of money is truly the root of all evil then I must be one of the world's most virtuous men. Money and me, we're barely on speaking terms.

• I guess it's because the name seems both generic yet familiar, but Rolls-Royce was founded by Henry Royce & Charles Rolls. Who knew? It's like learning my favorite music genre was founded by William Rock & Todd Roll.

• Many of us try & include some exercise to keep firm & appealing. But as we age, gravity & disposition lead to key muscles we rely on to be appealing to atrophy. Abs? Butt? No ... face! Try smiling without provocation. It's not easy. There oughtta be an exercise. Now, gimme 10!

• Not sure I even heard this right, but it sounded to me like ol' Doc Fauci said those of us who've been vaccinated have been liberated. We're now free to go anywhere -- indoor or out --pantsless! I'm guessing the Freedom Caucus is "behind" this. Yippee! See you tomorrow!

• I advise everyone to dream big. Outlandish, colossal, preposterous big. Not because big dreams will all come true. Dream big because with big dreams even the falls are more fun.

• We live in an era where many men and women boast they say what they think. They fail to realize the real virtue is to think what they say.

• Today I'd like to complain about the misuse of the term "movie star." With all due respect to guys like Brad, Leo & Johnny Depp, they do not star in movies. They appear in them. Now, Burt Reynolds. There's a man who starred in movies.

• It wasn't done by design but my go-to bourbon has become the one that best describes me. I'm not a Jack or a Daniel, a Jim or a Beam. What am I? I'm a turkey who on occasion still gets a little wild. #WildTurkey

• Do you think cavemen and women were emotionally developed enough to mourn the passing of a mate or they just fired up the grill, sprinkled on some seasonings and started inviting cave neighbors to the picnic.

• With so many superhero movies based on the mingling of DNA, I'm surprised they've yet to sketch an insect hybrid adept at calming Opie's fears, winning the Mayberry bake-off and putting the sting on Moonshiners. All hail Ant Bee!

• A toe nail is a uniform part of the human anatomy. It is perfectly acceptable to discuss a toe nail in polite conversation. A toe nail is not to be confused with a toe screw.

• Mulch! Mow! Plant! Prune! Repeat! If we devoted as much time to understanding one another as we do to lawn care things like checking out opposing Facebook views wouldn't be so nerve-wracking.

• Practicing Catholics who car pool to worship are engaged in Mass transit.

• If all the people who so casually remark to relative strangers, "Now, I'm not racist, but ..." suddenly and inexplicably become racist, man, I fear America could be in for some real problems over race.