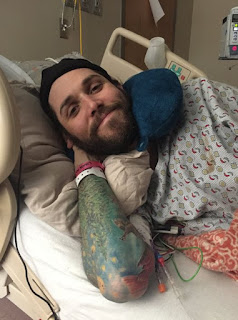 It was about two years ago the bartender startled me by telling me out loud and in front of potential teasers, “I love you.” And it wasn’t said with even a hint of sarcasm like when I leave a quarter tip on a $25 tab.

Hey! You try properly positioning the decimal point on your tip calculator after four Wild Turkeys.

The bartender is named Zack.

So get those gooey romantic motivations out of your head right now.

He said it like he knew I’d be touched by the earnest declaration and that was all the motive he needed.

I tell you, the kid has a big heart.

Flummoxed by the flattery, I gathered myself up and said, “And I’ll see you tomorrow night!”

I’m of a generation that is still awkward about proclaiming our love for other men.

But I was touched because I like Zack and am aware he considers me a bit of a role model, albeit one who unwisely spends far too much time and money in Flappers, the cozy second floor tavern conveniently located precisely 27 steps below my Tin Lizzy office.

It’s an interesting time in my life. I have enough accumulated wisdom to be engaging and am still (for reasons even I cannot fathom) hopeful enough about the future to not be maudlin about the past.

It helps, too, that he thinks I’m funny and puts thought into my less-obvious jokes, many of which I test drive with Zack before posting. It’s how I knew my ancient Egyptian reference worked.

“Did you know, Zack, that most mummies are daddies?”

He did not react. He just kept mixing another tropical rum-based drink he calls a “Zack-quari.”

Then he snorted. That kick-started a chuckle that led to genuine laughter. It wasn’t quite a belly-laugh, but it was thoracic in origin.

Brightening his day had brightened mine. It’s essential in life to have at least one person you see near daily who gets all your jokes.

Not only does he get my jokes I entrust him to deliver the punchlines.

Sometimes I’ll play straight man and ask in a voice loud enough to be overheard throughout the bar, “Say, Zack, do you happen to have a robust, full-bodied wine that hails from the sunny slopes of Australia?”

With no pause, just full confidence, Zack will say, “You bet Shiraz we do!”

You don’t have to be a wine snob to get that one.

I don’t want to mislead anyone to think I believe he loves me exclusively. Far from it. He loves and adores his parents, his brother Josh, his girlfriend Michelle, and scores of friends and most of his customers.

And doing that takes a really, really big heart.

What I’m trying to convey here is that Zack is a funny, loving, optimistic, cheerful, caring guy. He’s absolutely wonderful. Like I said, big-hearted.

Incredibly, his big heart is what doctors worry might kill him.

He overcame a nasty bout with Covid that left him susceptible to double pneumonia. It was November 14 he drove himself to Latrobe hospital where doctors were so alarmed they ordered him Life Flighted to UPMC-Presby in Pittsburgh.

He’s been in-and-out of Cardiac ICU ever since.

The reason? He has an enlarged heart. The valves are malfunctioning. He needs open heart surgery to install a heart pump, likely a bridge procedure until my friend can get a new heart.

And I am devastated.

We live in a world awash in utterly heartless bastards thriving in malicious pursuits. They think only of themselves. Do they care more about money than humanity?

I ghoulishly scan the obits for those with hearts I feel are worthy of my friend.

You’d think with nearly 300,000 U.S. Covid deaths there’d be a bumper crop of useful organs on the shelf, but current research about the viability of transplanting organs from infected donors is inconclusive.

You could say it’s very disheartening.

That’s the kind of joke I used to look forward to sharing with Zack.

I miss my friend.

And at a time when pandemic reigns and millions of good-hearted Americans are fighting infection, I’m saving the majority of my prayers for the big dude with the bad heart.

Because, Zack, I love you, too.

Man you summed up a lot about our relationship with Zack. Beautiful written. I long for the day this beautiful man is serving us libations once again, and to the next time we dance to live strings.. cheers!

Thank you for sharing this. Zack holds such a special place in my heart. He is one of Jay's best friends and I've had the pleasure of knowing him for quite along time. I'll be calling on my prayer warriors and if we can do anything else please please ask!! Love you Zack❤️��

Better words were never said. The man always has a smile and a hug and a song in his heart.
And he is a great dog man! Tell him Kathy and Ed are thinking of him

Well I know this young man way back in high school. Always wears a smile. A good friend of both my boys. Thank you for posting this. I will pray daily for this man. Stay strong ZAK. I love you. Moma bear

My heart is broken by this and I am praying with everything that I have for our friend. There is not a time that I can recall where his smile and warm welcome has not drastically improved my day. This was beautifully written and portrays the love we all have for Zack.

Thank you, Chris, for these words of compassion, friendship, honor, concern, . . . . Indeed, your words help us all understand the importance of love in our lives. Zack always made Kathy and me feel so welcome at Flappers. We found pleasure in being in the same space with him and parted anticipating enjoying our next visit at Flappers. Our prayers go out for him and all his caregivers.

Thank you Cheryl, Jessica and David, for your kind words and loving sentiments about our friend. Keep praying! We're right there with you!