The hand shake: Its past, present & future 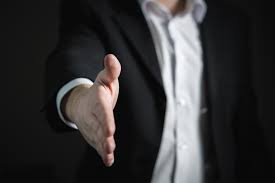 I’m friends with a guy who used to prepare for party introductions by pulling down his zipper and shoving his right hand out the opening so it would appear he had a fully functioning hand where other men have a penis.

I remember him doing this mostly at Ohio University, the proud Athens, Ohio, institute of higher learning responsible for educating numerous award-winning scholars whose disciplines have done so much to advance humanity.

Bob wasn’t one of them.

Still, I’d choose his company over all the achievers.

I wondered how current circumstances regarding COVID precautions would alter his greeting stunt. It wouldn’t be as funny if, say, he had to wriggle his entire arm out the zipper so he could do a Fauci-approved elbow bump.

I wish I didn’t feel obliged to game plan my contact greetings before every simple howdy-doo.

Is this a fist bump situation or would a flying elbow suffice? Or should I just wave from across the room and hope my eyes convey I’m smiling beneath the mask? Or, egads, should I go commando and just shake the guy’s hand.

It is said the first handshake was initiated by Assyrian King Shalmaneser III who is depicted in a 9th century B.C. relief shaking hands with a Babylonian ruler after he’d sold him a used Chrysler.

Kidding! There were no Chryslers 2,900 years ago.

It was a Jeep.

By the 5th century BC,  the Greeks shook hands as a way to signal peace — and to ensure neither person was carrying a knife; a safe guard that continued through Medieval times when knights gave extended hands a vigorous shaking to dislodge any deadly weapons.

Today the hand is the deadly weapon.

Yes, you can get killed shaking the wrong hand.

It’s a pity because we’re in the golden age of the hand shake. This is most evident in our professional athletes. The celebratory handshake is choreographed and often involves the full body with every joint and limb being summoned to juke, bump or jive.

I remember seeing even the cellar-dweller Pittsburgh Pirates perform a compelling full-team celebration after a Josh Bell homer in an otherwise meaningless July loss to the Cincinnati Reds.

I watched it three or four times. I remember thinking, “If this team ever gets as good at hitting the cut-off man as they are at celebrating a solo homer they might have a shot at finishing over .500.”

I wish the CDC could come out with some thoughtful, well-researched guidelines about handshake etiquette that half the country could mock and ignore while coronavirus indiscriminately kills us all.

Until that happens I think instead of shaking hands I’ll merely shake.

When introduced I’ll from safe distance shake my whole body like an uncoordinated old white guy trying to dance to hip hop or — and picture this — shake like a guy with Parkinson’s.

But let’s not get ridiculous.

I’m no expert, but I think if we all shake hard enough the virus will drop off the body the way water sloughs off a wet dog.

Then we can squash ‘em as they try to flee to a more sedentary host.

If that proves ineffective, I think I’ll start running around with my hand sticking out my fly like my old friend Bob.

I remember everyone at the party keeping a safe social distance from guys like that.

How Real Men (like me & Michael Keaton) shake hands

There is a solution! https://approximatelyforever.com/time-for-the-handshake-to-bow-out/