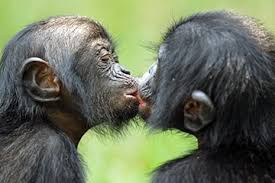 In these times of tumult and vitriol, it’s worth considering the problem-solving traditions of the bonobo monkey, the closest animal relation to me and, yes, you.

In light of that kinship, I request you join me in reading the rest of today’s blog with your clothes shucked and tossed in the corner.

Not wearing clothes — or one would assume condoms — is an evolutionary efficiency for animals that couldn’t keep their pants on even if pants made sense — and pants don’t make sense until until you start needing pockets, which the bonobo won’t need until it begins to vape.

Researchers say the monkeys, which are ruled by old females, are too busy having polygamist group sex to seek the stress-release of a toke.

So where’s all this monkey sex taking place?

The central west African nation called the Democratic Republic of the Congo.

Actually, it’s unlikely these most contented primates give a hoot about politics.

What would it take to get you to not give hoot? To monkey see, monkey don’t. To go bonobo.

I’m thinking 5 mg of Flunitrazepam ought to do it.

Never heard of it? It’s aka rohypnol with the street names Forget-Me-Drug, Pingus, Lunch Money Drug, Mind-Eraser and …

It has a dark reputation for its use in date rape, which is a shame because it’s beneficial in treating the scourge of insomnia.

But that a few miscreants can use pharmaceuticals for illicit purposes outside prescription instructions is a lament for another day.

This is about how America could use one great big roofie.

See, I was a reporter in the early ’90’s when roofie’s first hit the street. Back then they were known as “hug drugs.”

We could all use a lot less hate and a few more hugs (side effects include heavy petting and could lead to metaphorical monkey sex).

Our curse is to live at a time when many people aren’t truly happy unless they’re truly angry.

We’re so fixated on finding a cure for Covid-19 — at least those of us who believe it’s an actual thing — that no one’s paying any mind to the deadlier as-yet unnamed disease that’s tearing us in two.

One is killing Americans.

The other is killing America.

Many of us have allowed serious policy differences to usurp our common humanity. We say things on social media that on the playground would earn a punch.

Even if it were deserving, could one half of the nation kill the other half? Some seem intent on finding out.

When even the mundane are deemed worthy of demonization, Hell itself becomes pedestrian.

I’m loathe to be out of (goose) step with so many of my fellow Americans, but I declare myself a conscientious objector.

I object to so much unconscionable behavior.

You can find me strolling through the woods and climbing all the highest trees in search of the perfect banana.

My fear is if more of you don’t join me in this monkey business, we’re all screwed.

Men with tail making monkey out of me