Not broken but ... How I wound up in cast 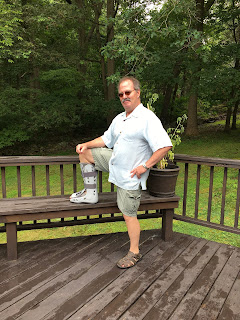 The last time I had my right leg — and that’s the ol’ ass kicker —  orthopedically immobilized was 1978.

I was captain and star defenseman for the Mt. Lebanon Blue Devils varsity hockey team. I intercepted a neutral zone pass and broke in to score what would be the sudden death game winner.

Intent on stopping me, two Keystone Oaks goons tripped me so viciously they broke my leg in three places. Didn’t matter. I still scored and won the game. Through my pain, I remember cheerleaders rushing the ice to carry me to the ambulance where they took turns feeding me grapes and whispering what they were going to do to me on prom night.

Only about 30 percent of that story is factual. I thought I’d entertain you with some sports heroics and  romance before getting to the dud of a tale as to why my right leg is in the boot above.

I was strolling across my lawn. I slipped on a slight hill. Couldn’t walk. That’s it. No derring-do. I was probably a good four miles from the nearest cheerleader.

With the basics as innocuous as that, there are bound to be extenuating circumstances. Here they are with the percentage of truthful blame I’m assigning…

• Uneven terrain (30 percent) — Our property is in the woods so although it is relatively flat, there are roots, gopher holes, dog poop and because I remain casual about lawn care there are vast savannahs of unkempt lawn shaggy enough to conceal one of those double decker buses they show in the London post cards.

• Sandals (20 percent) — As a concession to summer ease, I’ve been wearing sandals even though I’m convinced sandals ought to be worn exclusively on the beach or else they’d be called dirtals or grassals.

•Dimly-lit sidewalk (10 percent) — I know that sidewalk like the back of my hand, which now has a scrape on it from the fall.

• Parkinson’s Disease (40 percent) — Once you start to compensate for a malady-imposed limp, it throws the whole band off. My band’s been out-of-synch for nearly three years now (think The Who trying to replace Keith Moon). Limp compensation turns you into a beer can chicken without the half-empty Budweiser can shoved up its ass. You become wobbly, un-stable, which I guess if you ask any honest chicken it’d be a small price to pay for avoiding the aluminum violation.

• Alcohol (100 proof) — Yes, it was a Friday evening and I’d been drinking, but if you think I’m blaming Wild Turkey on my fall then I guess this is your first time here. So I invite you to consider this a blind date that is going to either end in acrimony in two minutes or on Monday in Vegas with you and me getting hitched by Elvis in The Chapel of Love. But know this: if ever I throw good bourbon under the bus, I’ll be diving right behind it with a straw, some shaved ice and a heart full of soulful admiration for the essential Kentuckians who made the elixir.

So when did this happen? Last night? Night before last?

Nope. It happened 34 days ago. When did I finally go to the doctor?

In short, I treated my foot  the way Trump treats a global pandemic.

We’re like a lot of guys in that we don’t go to the doctor unless  we see blood rhythmically pumping from a severed limb.

“Well, the good news,” the doctor said, “is that nothing’s broken. The bad news is you tore up a bunch of ligaments and suffered needlessly for a month when you could’ve been healing properly.”

He gave me the above boot to help. It’s made of durable space-age polymers that practically ensure I’ll fall again, (likely Tin stairs, Friday, soused on Wild Turkey) and will break every single bone in my body — except the ones inside the boot.

On the plus side, it’s great for crushing beer cans. Especially empties!

I thank you for your heartfelt concern. I’m sure everything’s going to work out fine. My foot will heal and together we’ll march into a future that’s brighter for us all.

A ’19 Happy Birthday update on my condition

How recollections of bourbon … influence my NFL picks

My aversion to big ass needles

And here I thought you were just whining 2 weeks ago so as to drink more beers to mask your imagined pain...now that I know it was real I have no regret. It was a fine time in Latrobe with my favorite PROSEtitute...I’ll catch you next time I’m passing thru town😘

PS: As an alumnus of the great institution of Keystone Oaks HS, and a fellow goon. While we typically didn’t win our sporting events vs the Lebo gents...we did win the fight after in the parking lot. #goonsquad

Goonsquad! You're too refined. Boy, did I enjoy that day. I'd forgotten how much fun it was to bullshit with you. Let's not let another pause in our chats ever go that long again. See you, er, ... Friday! I expect you here by 4 p.m. Thanks, Chris!

Glad you are taking care of that, albeit a month overdue!
by the way, I am a KO grad and didn't know you were a Mt Lebo cake eater!