August Tweets of the Month -- Hooray! 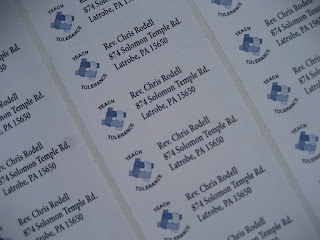 Buy books from me and this is likely to be the return address. I found out many years ago that people treat Rev. Rodell way better than they do plain old Mr. Chris Rodell. Enjoy this month's tweets!


• Bob Dylan is 79. He's been singing "Knocking on Heaven's Door" since 1973. Who else thinks when he passes on &  knocks on heaven's door, they’re gonna  say, "It's just that Dylan kid again. He's been knock-knock-knockin' on heaven's door for 47 years. Just ignore him. He'll eventually go away."

• Can’t disagreeing on policy be enough? Do you have to say your opponents are blood-sipping pedophiles intent on elevating Satan? You're making hating you right back far too easy.

• Constitutional scholars on all the Sunday news shows advising what to do if Trump loses election and refuses to leave the White House. What to do? Barricade him IN. He can't leave. Then tell him you're cutting the cable.

• The only thing getting me through this toxic divisiveness is the knowledge that come Nov. 4, all our differences will be set aside - best man won - and we shall march forward together & solve ALL our nation's problems. Because we're ALL Americans.

• New Muppet show (Disney +) getting rave reviews with one critic calling it "uproarious, joyful & heartfelt." Me, I'm tickled anytime a creation described as "heartfelt" comes with a felt heart.

• Oh, Facebook, so stingy with your 7 measly emoji! Don't you realize most of us feel 7,000 emotions when we ask ourselves, "Has enough time lapsed since the last time I checked Facebook?”

• I’d like to thank the rest of the world for putting up with historic upheaval, civil unrest and more than 773K deaths just so we Democrats here in the US can get rid of Trump. We promise to return you to your regularly scheduled programming Nov. 4.

• Toilet paper hoarders beware: it ain't all it's cracked up to be and sooner or later you're bound to hit bottom.

• I’d like to see Trump deliver Biden's acceptance speech and Biden Trump's. Imagine the eye rolls, the sarcasm, the body language mockery. It'd be as insightful as it was entertaining.

• Even in normal times, most well-off people live lives of deep ingratitude. Ask them to count their blessings and many will begin the count with negative numbers.

• Given our inability to agree on even basic facts, I believe we're on course that in the next few weeks every other American will be able to at any time wear an "I'm With Stupid" T-shirt and be indisputably correct .

• Help me understand: What do people who don't like Bob Dylan talk about when there's one of those uncomfortable lulls in the conversation?