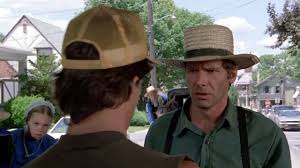 It happened almost exactly as I’m about to tell and even if it didn’t I’d have for story purposes pretended that it did so the point is moot.

The particulars are unimportant, but Val and I were butting heads over a local bulk grocery store run by a fundamentalist religious sect.

But the people at Lapp’s are nothing like that. They all smile, are courteous and run the store with such cheerful efficiency I can only pity the supervisor tasked with selecting the employee of the month. They’re all deserving.

So Val contends they are Mennonites. I say with conviction they are Amish. My smug assurances leads her right into my little trap.

“And what makes you such an expert?”

“What makes me such an expert?” I thunder. “Let me tell you: I’m the author of the 32nd best blog for Amish people on the whole flat earth!”

And that’s an assumption. For all I know, the Amish believe earth is cubic. Despite the honor, my working knowledge of Amish practices is next to nothing.

For perspective, the Top 4 listed are in order: “Amish Wisdom Beyond the Bonnets,” “Amish America,” “Ohio’s Amish Country,” and “The Amish Catholic.”

The titles make them all seem worthy and earnest blogs devoted to spreading awareness and understanding of these curious people.

Has me thinking the folks who chose this blog as one of the top 50 blogs for Amish readers declined to actually bother to read the blog. And I am once again reminded what a bone-headed idea it was to call this, “Eight Days To Amish.”

It stems from my days at The Pond when I was for $30 a month cherrypicking wifi off my apartment neighbor. He moved out and took his wifi with him. Well, $60 a month was too much for me so I decided to go without. Being too broke to afford internet was a blow to my self esteem. I wondered what would come next.

“Would I trade my kids for cattle? Start churning my own butter? Why I’m practically eight days to Amish.”

Could it be any more misleadingly nichey?

I wonder if I’d be more successful had I appealed to patriotism with, say, “Eight Days to Freedom!”

Or leisure: “Eight Days to Beer!”

Or a crafty hybrid: “Eight Days to Free Beer!”

I’m instead 11 years into this pointless blogging gig and wondering if I’ll be invited to an awards banquet where the gobs and shoo-fly pie are pretty much guaranteed to outnumber the complimentary hookers.

And I feel bad for two people.

The first is that kid who’s thirsting for spiritual solace.

Scientology has too many Hollywood glitter shitters. He doesn’t have the pipes to sing with the Baptists. And the snake handlers service conflicts with dart night down at the local tavern.

He needs religion. He needs it fast.

He finds my blog is the 32nd best Amish blog in the world and, hey, it hints he can become Amish in just eight days.

He reads the blog and becomes enraged. It has nothing to do with becoming Amish.

He goes to Hell!

The other guy for whom I feel bad?

It’s the guy who actually writes about the Amish because he believes it is the way to assured salvation. He puts his heart and soul into the blog. He’s told he’s being considered for inclusion on the prestigious Top 50 best Amish blogs list and that could mean a significant boost in his profile and income.