#MeToo: What happened in '85 in Athens, Ohio, when I grabbed a girl's ass 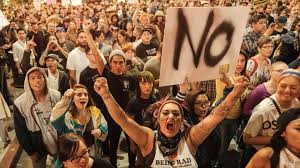 Like most men in this #MeToo year I’ve done some soul-searching about whether I ever mistreated a woman in pursuit of cheap sex.

Did I ever put my hands on a woman in a unwanted way sure to offend? Did I ever grope or otherwise sexually harass a female?

In fact, I did. I once grabbed an unsuspecting young woman’s ass.

I used her. Just not in the way you might think.

First, I must set the scene.

It was 1985 at the Sigma Nu fraternity house in Athens, Ohio, a place my own grandfather once described as the only dwelling he’d visited where he felt compelled to wipe his feet on the way out. So there are some obvious “Animal House” elements to this story.

I can’t remember the sorority or the party theme, but I do remember the girl. Her name was Jenny. She was young, pretty and had really great hair.

It was a very long time ago.

I didn’t have any real aspirations of dating her. Many pretty young girls just like Jenny had over the years rejected my advances with reactions ranging from polite indifference to scalding ridicule.

I didn’t mind. It taught me perseverance, a trait I’d need in the next three decades of trying to earn a living as a freelance writer prone to working with editors who’d respond to my literary advances with reactions ranging from polite indifference to scalding ridicule.

So I was just being friendly.

Up to that point in my young life, I don’t believe I’d ever pawed or groped a girl in any unwanted way. Even then, I knew it was wrong, something Bobcat stalwarts and disgraced serial pigs Roger Ailes and Matt Lauer apparently never learned.

What made me grab Jenny’s ass? The devil didn’t make me do it.

Bob and I had known each other in high school, but didn’t become true buddies until Athens. He’s always been a very funny guy and a world-class prankster. Like so many other friends from those raucous times, I love him very much.

As I was chatting with Jenny, I saw Bob standing near the dance floor about 45-degrees behind Jenny’s blind spot some 20 paces away. Some mix of their positions, my buzz and an eagerness for mischief combined to inspire the restless joker in me.

I motioned for Bob to join us and he began a 3-second stroll across the dance floor.

I said to Jenny, “I’d like you to meet Bob. He’s a great guy, but watch out. He can be a little grabby.”

From that instant, it was like the whole thing had been choreographed. Because, having been warned, Jenny turned to Bob just as he came within arm’s length. As she turned her attention from me, I deftly reached out with my right hand and gave her Bob-side tush a robust toot.

I’m not saying I would have not grabbed her ass had I been forewarned, but I was totally unprepared for her reaction. It was like she’d been tased. In an infuriated micro-second she turned on Bob.

In my life, I’ve seen Muhammad Ali demolish Joe Frazier, saw Mike Tyson destroy countless forgettable bums and once spent an afternoon watching Sugar Ray Leonard tear a hapless sparring partner to bits. But I’ve never before or since seen a haymaker left delivered to an exposed cheek with such precise fury as the one Jenny landed on Bob.

Had she opted instead to knee poor Bob in the testicles, I’m sure Bob today would be dead and I’d be telling this cautionary tale with just a shade less jocularity.

For story purposes, it would be great if I could truthfully declare Jenny changed her name to Gloria Allred and on the spot decided to devote her life to championing downtrodden women, but that would be false.

She instead turned on her heels and stormed out the door, taking with her her entire contingent of comely sorority sisters. The party was over, leaving me as the only individual that whole evening to have even a bit of fun.

A few short years after that the Sigma Nus were thrown off campus for poor grades and disreputable behaviors. The charmingly ramshackle Court Street house that holds so many vivid memories for me is now an unassuming university building haunted, perhaps, by the ghosts of ass grabbers past.

And I’ve never even once since thought of engaging in such despicable behavior against an unsuspecting woman.

Neither has Bob, of course, but that’s something anyone with even a basic appreciation of the powerful consequences of cause-and-effect lessons already knew.

Bribes, hookers & egos; why FIFA scandal promises to be so much fun

When will a man ever accuse a female supervisor of sexual harassment?

What I’d say if Erin Andrews was my daughter