Who stole my American flag? 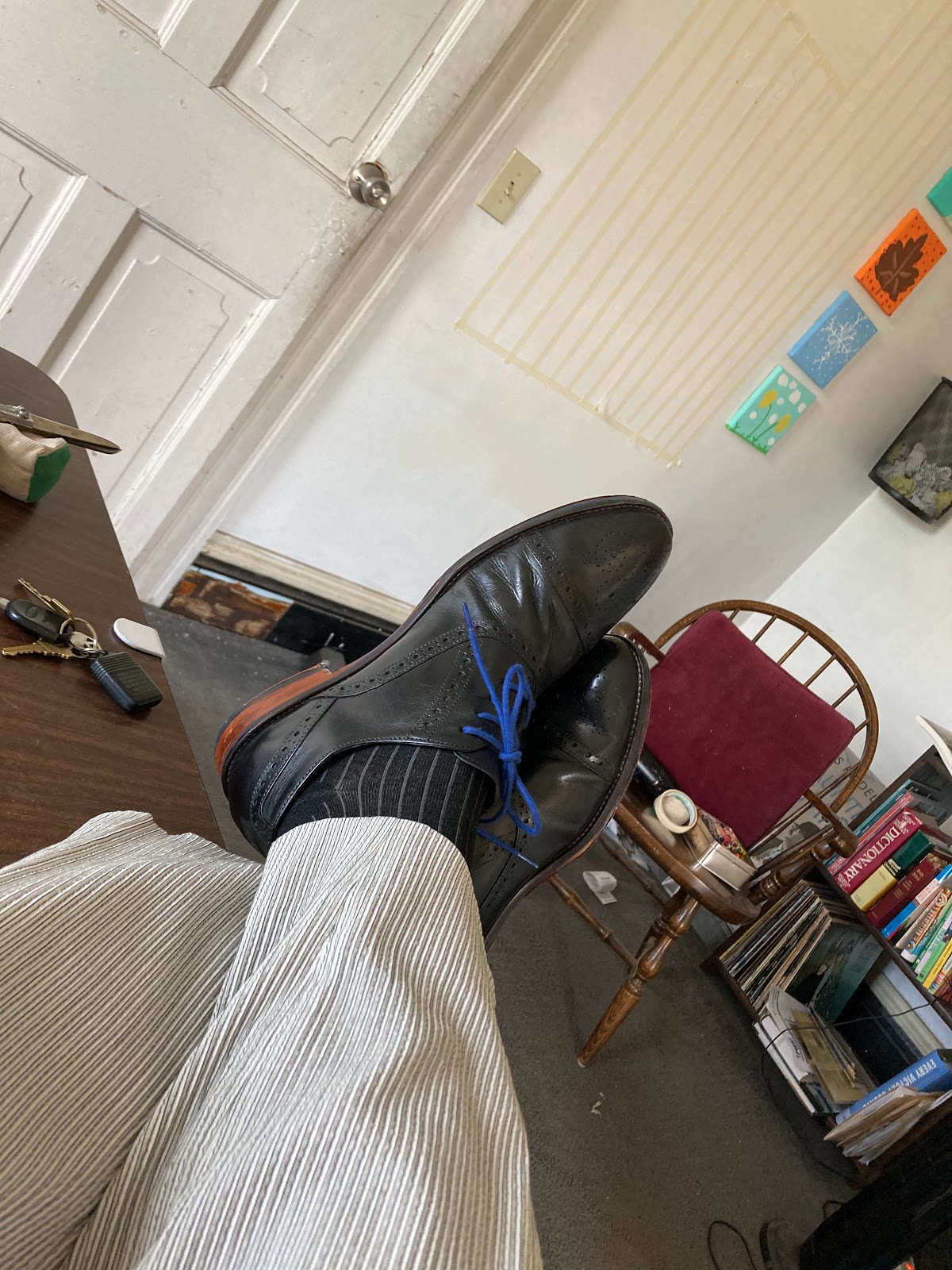 (Masking tape above shoes shows where stolen flag was)

The crack team of amateur sleuths I brought in to solve the crime found a glaring breech that they said practically invited theft. It was a mere 6 inches.

That was all the crook needed to sashay into my office and shatter a sense of trust I’ve fostered for the seven years my office has been above the landmark Tin Lizzy in Youngstown, Pa., (pop.  324; defining characteristic — one stop light/ six liquor licenses).

The gap isn’t between the walls, doors or windows.

This gap is between my ears.

“What kind of idiot has a lock on his door and doesn’t use it — and in a building full of drunks?”

It may sound conceited, but I believe only the very best kind of idiot would do such a thing.

I’ve always taken pride in having an open door in case any Tin Lizzy patron interested in my books wanted to come by and peek at my office, which appears to have been furnished completely in the style period of Early 8th Grader.

There are drawings from the kiddos, crayon nicknacks, and out-of-focus pictures of me with loved ones and buddies in various stages of sobriety.

I contend every office would look like my office if big shot execs didn’t care about trying to impress visitors with how their office looked.

I believe the theft occurred late Thursday night. I walked up the three flights of stairs to my office and noticed little things were amiss. Some posters were down. A fan had been moved. The chair was facing the other way.

I was confused enough that it took me about 30 seconds to notice one big thing was amiss.

My American flag had been ripped off the wall.

Who steals a flag?

In some ways it’s the perfect crime. You can fly it off your front porch and nobody’s going to say, “Call the cops! That looks like Rodell’s flag!”

It’s become stylish to alter the American flag to suit your outrage du jour. I’ve seen standard flags emblazoned with “Don’t Tread on Me!” Some have abandoned the red, white and blue to celebrate sexual orientations in rainbow pastel. And some exhort NASCAR driver Brandon Brown to accelerate.

So compared to those my flag’s a bit of a bore. It’s red, white and blue, 50 stars, 13 stripes. The dimensions are 3x5, or roughly the same size as Superman’s cape.

It looks like every other flag. You’ll see a million just like it over the next week.

What made it special is known only to me and my family.

It is a battle flag.

Now, I’ll understand if proud veterans belittle my contention that my stolen flag was flown in battle. There are no bullet holes. It is not singed by enemy fire. It has no mud I can claim was splattered from Iwo Jima, Normandy or Dien Bien Phu.

It was purchased 21 years ago at a Latrobe flag store from a flustered proprietor who couldn’t believe I’d called to inquire if on that day his store was open.

“No, we’re not open! Aren’t you watching the news?”

I told him the news was why I’d called.

But apparently flag sales are so precisely seasonal that it never occurred to him why out-of-the-blue a stranger was calling about purchasing an American flag on this crisp Fall morning.

He must have thought I needed some orange and purple Halloween pumpkin flags.

And that’s how I wound up forking over $26.95 for an American flag that some likely drunk just had to have in the middle of the night when no one was watching.

Also stolen was a 15-year-old iPod Classic I relied on for loud musical inspiration for nearly every word I’ve written since 2007; and a ceramic owl with a coin-sized slot in it dome for change, a gift from the Reynoldsville Public Library for speaking there in 2017

So I’m looking for a patriotic thief with good taste in music and an excess of pocket change.

I hope the culprit brings it all back or at least stops by to argue why my stuff should be in his house.

I suppose many of you are feeling outrage on my behalf, but I’d encourage you to let those feelings go.

I have very little, but the best parts of me — and you — are the parts that cannot be locked up or stolen.

And I’d rather folks see me as an open door and wonder what’s in my head than hear I cower behind a fortress and wonder if I have a heart.