Ways in which I'm similar to Pluto 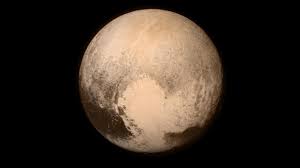 You and I probably share a lot of similarities. We’re a couple of carbon-based life forms who rely on oxygen for necessary respiration and we have a biological need for things like pizza about about once every four days.

But there’s one realm in which we’re not at all alike. That is you probably don’t spend much time thinking about how much you have in common with the planet Pluto.

You probably don’t even give much thought over whether it’s even a planet or not.

I’m the exact opposite. I think about it all the time.

I one day dream of walking into a saloon strewn with evidence an angry brawl had just occurred — busted pool cues, broken glass, pools of blood mingling with peanut shells and sawdust on the floor.

I’ll step over the bodies and ask the bartender what happened.

“Well, ol’ Burt said Pluto wasn’t a planet and he just wouldn’t let it go. Hank wouldn’t have any of it and it was on.”

My kind of bar.

I’ve been comparing myself to Pluto for about five years now. It’s all because of Arnold Palmer, who to my knowledge had never golfed there.

Neither have I, of course, but it wouldn’t surprise me if one day future explorers find some of my old Titleists on the planet surface from back when I couldn’t control the driver..

A visiting friend observed how lucky I was to be good friends with Palmer, to be in his inner circle.

Not true, I’d say. I was, indeed, fortunate to have chummy access to him, but I wouldn’t presume to say I was a close friend or part of his inner circle.

“It’s more accurate to say, I was lucky just to be in his orbit. But I was like Pluto and many scientists argue whether or not Pluto is even a planet.”

So I began to wonder about Pluto. Often. How much do we have in common?

Did you know Pluto has five moons and they went billions of years without being seen? If you have moons to me, right there, boom, you’re a planet. And its moons have names: Charon, Styx, Nix, Hydra and Kerberos. We have one lousy moon and it's named "Moon."

What gives? It's like having a dog and naming it “Dog."

I have one moon and it gets seen in public about once every 12 years or so or whenever I have an occasion to don a kilt.

It takes Pluto 248 earth years to make one orbit around the sun — 248 years! Just imagine what a Plutonian calendar would look like. And let’s not even think about adding the chaos of things like leap years or Daylight Saving Time.

It’s difficult for our feeble minds to fathom such stellar distance. For instance, the light leaving the sun right now won’t hit Earth for eight minute.

That same light won’t reach Pluto for another 5 hours and 42 minutes.

Another example: It would take a solar powered golf cart traveling 36,400 mph about 9.5 years to reach Pluto -- 9.7 years if you stopped for pee breaks.

It’s just a long way off and there’s no conceivable reason to go there. I say that with the understanding that, mark my words, one day there will be a souvenir shack there and its top seller will be one that says, “My Grandparents Went to Kerberos and All I Got Was This Lousy T-shirt.”

I guess I feel a kinship because of the intangibles.

It takes Pluto nearly 250 years to orbit the sun; It takes me nearly that long to get out of bed on a Sunday.

Pluto is made primarily of rock and ice; many of my career decisions seem in hindsight that they made after consulting a man whose head was filled with rock and ice.

Pluto struggles for recognition among its larger, gassier neighbors. And that is where the similarities end.

No one’s gassier than I.

But if you’ve read this far, you probably already knew that.