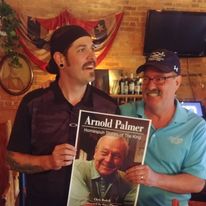 The tall brown-haired stranger pulled up his stool next to mine and smiled sunshine. It was just the kind of subtle move a savvy bar patron makes that lets me know I’m in for about an hour or two worth of agreeable conversation.

It’s cheerful, unimposing and cracks open the door to chumminess.

We began to chat. He was polite, well-spoken and conveyed a mirthful demeanor.  I felt we were on the verge of instant friendship.

But then he did something utterly despicable. Something so upsetting I knew I couldn’t stomach another minute with him.

The guy began to remind me of Zack.

I paid my tab, left my tip and abruptly told the friendly imposter I had to go.

The nerve. It’s nearly impossible to calculate how many hearts you’ll break if by millions-to-1 genetic chance you resemble the late Zack Starrett and turn out to be just someone who sorta looks like him.

Appearing to be Zack when you are not Zack is a cruel fraud. It’ll be one year on December 23 when Zack, 33, died of Covid-related killers.

I still really miss Zack. And I know I’m not alone. It’s a rare day that goes by when I don’t hear someone express a similar sentiment.

He was funny. He was thoughtful. He was charismatic. He was a good listener.

He was a bartender!

I’ve said before how I once went through a list of the five most influential people in my life and that four of them were bartenders and how the realization helped me make sense of my life, which more and more seems to be one punctuated with professional failure and personal joy.

But a good bartender, one like Zack, has all the ingredients one needs for enduing camaraderie, but in addition has one that so very many in our busy world  either lack or refuse to indulge.

Zack had time. All the time in the world, it seemed, admittedly a miscalculation in regards to Zack and his slim life portion. But before the demise no one saw coming, Zack had time to chat, to philosophize, to mull over all the robust mysteries of life.

If I’d have only known he was going to die so young I’d have talked much faster.

Have you lost your Zack yet?

St. Vincent College here in Latrobe lost theirs last month. His name was Patrick Kennedy. He was 66. He, too, tended bar. He was a fixture at Falbo’s Restaurant & Lounge near campus.

I’d been hearing about him a lot lately. He was beloved and really catered to the student crowd. Not in a mercenary way, but in the way I guess Jesus would have if instead of carpentry he’d have been involved in serving libations.

I chock that up to my serial monogamy when it comes to things like my bartenders and my bride.

So I had all this on my mind when I see a sign on Route 30 outside one of the franchise burger joints a plaintive message that said, “We’re All Thinking of You, Aiden.”

Who was Aiden? What had happened to him? Could he get the message to Zack that we really miss him?

I stopped in for some answers.

But I was rebuffed. The manager seemed very suspicious of me.

I get it. Responding like a caring human being IS suspicious. Good thing the manager wasn’t packing heat. My empathy could have gotten me killed.

I did learn that Aiden was hurt in an accident and is expected to recover.

I was happy to hear that.

Let’s end today’s meander not on a note of departures, but on arrivals.

This will be the first Christmas for a boy who very well may grow up to look like Zack. In fact, Zack is part of his name. Part of his DNA, too.

Now him, I’ll not begrudge if he grows up to look just like Zack. He can imitate his mannerisms, his confidence, his cheer, his eagerness to sit down and try, really try, to figure out what it’s all about.

It won’t bother me one bit if I look at him and think, my God, it’s my friend! He’s back! I’ll, in fact, revel in the mistaken identity.

Just as long as he behaves like him, too.

• We Heart Zack! A love story about a man and his bartender

• RIP Zack & the tears we shed for the ones we love