Best of the month Tweets 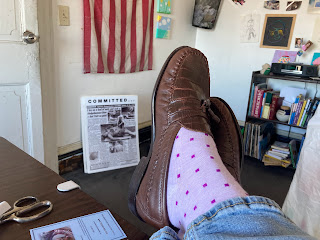 • I wonder if linguistic confusion is one of the reasons that keep young single heteros from ever getting together. Many single men lust for women who'll "put out" when what they're really after are women who'll put in.

• I like sitting on a porch whittling a stick and leaving all the young'uns gobsmacked when I say, “You know, I remember when Twitter was just 140 characters …”

• I remember as a boy my parents taking me to a candy store and being overwhelmed by row after row of nutrtion-free treats. Today, every store we enter is a candy store with the only difference is these adult candy stores also sell gas, jerky, beer, cigs and lottery tickets.

• Doing pointless research on Pluto for today's blog and learned Pluto has five moons named Charon, Styx, Nix, Hydra and Kerberos. We have one lousy moon and it's named "Moon." What gives? It's like having a dog and naming it "Dog."

• Another unforeseen Climate change will be the renaming of the seasons to more accurately describe the prevailing meteorological conditions. Goodbye Winter, Spring, Summer and Fall! Hello Summer, Summerer, Summerest and Fall (But We Can’t Get Back Up)

• In one of history's most savage ironies, it was 41 years ago today that a man who became famous singing "All you need is love," died when what he on that day really needed was a bullet-proof vest.

• Had Lennon been killed in '21, guaranteed, within two hours there'd be multiple conspiracy theories including one asserting Ringo was behind the murder so he could get to Yoko. And Tucker Carlson would say Lennon was a disgusting hippie who had it coming.

• At 7 hrs. 48 mins I'm finding The Beatles "Get Back" a bit of a slog. My mind wanders and I feel myself wishing for the sake of deliberate irony some enterprising documentarian would produce a film that was this earnest, this reverential and this devoted to memorializing every conversation about lunch, laundry and nasal obstructions and have the docu be about the making of "Debbie Does Dallas.”

• ”Hell to pay" is an expression that hints at eternal damnation. It is not to be confused with an absurd looking hair piece that becomes affixed to a bald scalp, also known as a "Hell Toupee."

• With Christmas forecasts in the mid-60's, I say it's time we rename the seasons to more accurately reflect Climate Change dynamics. So goodbye Winter, Spring, Summer & Fall. Hello, Summer! Summerer! Summerest! And Fallen (& we can't get up...)

• When the end is near I believe it'll be possible to buy time, but I'm pretty sure payment will involve an unforgiving sort of lay-away plan best described as “grave.”

• I wonder how long it'll be before the whole world is on fire and if there's some extra-terrestrial volunteer fire department that is right now racing across the universe to save Planet Earth. And I wonder how much they're going to charge and if they take Discover.

• One unforeseen consequence of global warming will be the demise of the jolly weatherman/woman. Catastrophic weather is becoming too common place to permit 12-minute chucklefests involving Aunt Minnie and her rutabaga that looks like Abe Lincoln.

• Overheard some bellyachers complaining about the length of time they spent at the red light at Rt. 30 and Arnold Palmer Airport. I've timed it and they're right. It's 90 seconds. Outrageous. It should take much longer. I believe in the future typical red lights will last at least 20 minutes. That would give stressed out motorists time to nap, safely respond to texts and calls, or maybe download some stress-easing porn. Plus, it would allow road ragers time to thoughtfully lay out the ground rules for a gentleman's duel that would be beneficial in reducing future traffic concerns by at least one.

• Anytime anyone gives me a hundred dollar bill, it feels to me like POTUS has just tossed me the nuclear football and said, “Here, you take it!” I feel like there’s been a huge mistake. I fear I’ll lose it or that evil doers will beat me up and take it away from me. I worry I’ll do something careless that’ll lead to a future that holds nothing but sorrow and desolation. So I wind up blowing a big chunk of it on nearby booze just to get familiar twenties back in my wallet. Now if somebody gives me two $100 bills AND buys me a drink, well, now you’re talking Mutually Assured Destruction.

• They seem like they’d be impossible to confuse one for the other, but Satan and Santa are one and the same to the careless typist.

• I never dreamed I'd enlist in the War on Christmas, but a line has been crossed and I'm now on a mission to cancel a traditional Christmas carol for its blatant assault on heterosexuality. "Have yourself a Merry Little Christmas ... Make the Yuletide gay?" Make it gay? The only sexual orientation Y.T  should be coerced into adopting is the one with which it feels most comfortable. If Yuletide were my kid, I'd encourage it to make up its own mind on such a personal issue. And I'd remind it, gay, straight, L or B, G or Q, T or 2, it will always be welcome in our home. Yule see!

• A wise man thinks long and hard before accepting a hungry cannibal's offer of oral sex.

• That tears come in only one flavor -- salty -- is a design flaw useful only to those who feel a profound sadness over things like pretzels. In the future we'll all be able to select tear flavors like we do at the movie theater soda dispensers. There will be champagne for tears of joy, ginger ale for tears of chronic pain, root beer for tears of nostalgia and sour grapes for when your political candidate tanks and you feel the only constructive solution is to vandalize the Capitol.