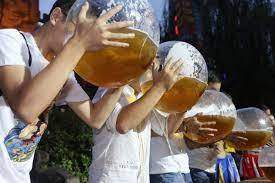 One of my favorite road-to-sobriety moments came during a ’94 “60 Minutes” interview Ed Bradley conducted with Mick Jagger when Bradley asked Jagger about his addictions.

“You think you’re having a good time, but you’re really a slave to (the drugs). Then there comes a point where you prefer to just do what you enjoy” without the interference of the addictions.

How long, Bradley asks earnestly, did it take you to come to this realization?

“About 25 years!” Jagger says and then he begins to cackle. It’s not a gloating cackle. It’s more a mirthful acknowledgment that, man, he got away with it, that there were zero consequences to his defiance of conventions. That, indeed, it is good to be Mick Jagger (as if there were any doubt).

Well, I’ve come to a similar revelation about my excesses and that’s where the numbers 52-37-48 come in.

Those aren’t the measurements of a voluptuous girl.

Those were the timed minutes it took me to drink 3 beers in one session. By timing my consumption I was able to put the brakes on yet another night of run away drinking.

My conditions have  forced me to become more aware of my body, its habits, flaws and failings.

See, I realized the other night I’ve been drinking beer for nearly four decades like my house is on fire and the only way to extinguish the flames is with my beer-based urine.

I think it’s because I’ve always since, oh, about the 4th grade been encouraged to drink beer. Lots of it. Fast. This custom was amplified when I began attending class at Ohio University; popular T-shirt: “Ohio U. A Fountain of Knowledge Where I Go To Drink.”

Some graduates depart schools of higher learning with quotes of the great philosophers ringing in their ears. The mantra that rings still in my ears is of maybe a dozen other young men circled around me screaming “CHUG! CHUG! CHUG! CHUG!’

They said it with such willful urgency it felt like if I let them down and drank at a rational pace they’d be expelled from school and thus miss out on five or so more years of pre-adult debauchery.

So I chug! Chug! Chugged!

And today I’m left to wonder how different my life would be had I surrounded myself with scholars who’d exhort, “STUDY! STUDY! STUDY!”

It was never meant to be. I’ve always felt right at home with the wrong crowd.

But I began to realize I was getting unnecessarily tipsy without intention or pleasure.

There’s no novelty for me to getting drunk. So I’ve basically cut that out. And I’m trying to lose weight and alcohol is a contributing obstacle to achieving that goal.

So I started timing how long it took me to drink one 16-ounce glass of Yuengling.

The positive results were immediate. I could see I needed to slow down. I’m sure I was drinking about three beers an hour. Sometimes four.

It’s fair to ask how things would be different had I come to this obvious conclusion 10 years ago? Twenty? Thirty or forty years ago?

Would I be more successful? More prominent? More fit? Happier?

Those are fair questions and I’ll get to them one of these days, I promise.

But first I must excuse myself.

I have some cackling to do.

• Here’s the Ed Bradly/Mick Jagger interview. The part where Bradley grills him about his drug use is at 13.13