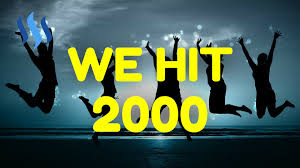 A friend once asked me the longest I’d ever gone without blogging.

It was a smart ass answer which was fine because blogging is a realm dominated by smart asses, not to be confused with intelligent ones.

I used to say blogging was the literary equivalent of running a lemonade stand. Then it dawned on me even 8 year olds know to charge a quarter for a Dixie cup of weak lemonade.

If I’d have charged 25-cents per blog and you’d have read every one you would have owed me $500.

Let’s conservatively say that 500 readers would have paid a mere $50-a-year to enjoy the blog for the past 11 years. That’s $250 K, what most people would call serious scratch.

I’d call it something else.

So this is no. 2,000 — that is optimistically assuming I finish and post, which is no sure thing. It’s taken me 42 days to write this much, which is the longest I’ve gone without blogging since I began blogging seriously in May of 2008.

And when I say serious blogging, I mean concerted. I’m never really serious. I was once and a devoted reader — she’s an old friend — said that was not my role. “Don’t you understand your role is to provide an escape to all the serious shit?”

I was unaware I’d even had a role and it involved silly shit.

It was for me a watershed moment. I realized I didn’t have to weigh in on fiscal cliffs, race relations or pending trade wars. There was already plenty of that.

And I had a blast. I truly loved being a court jester blog, even for the times I wound up in court.

But there was one problem and operating in an economic system based on Capitalism, it was a doozy. I couldn’t get people to pay for what they said they couldn’t live without.

Understand during this time I was busy crafting and pitching various book ideas I was sure would vault me to prestige, notoriety and professional stability. I never stopped striving for conventional success.

Alas, it never happened. Did I pursue prudent alternatives?

No, in fact, I defiantly ignored them. Sure, I was like most fathers in that I told my kids there was nothing I wouldn’t do for them. But I differed from nearly all of the others in that I’d hastily add ..

I remain stubbornly convinced the universe has erred when it comes to dishing out my just rewards and I’m perfectly willing to patiently wait for the cosmic correction to kick in. I’m hopeful it’ll happen by the Friday Happy Hour.

A reason the blog has been so sparse recently — other than sound economic priorities — is the true success of the Fred book, which, by the way, is almost half old blog items masquerading as “Life Lessons.” Enthusiastic reactions to these parts of the book emboldens me and I think justifies all the pro bono time I’d spent on the blog.

The sales, talks & signings have made this the most fun and fruitful stretch of what I for lack of a better word call my “career.”

Ideally, I’ll find a better balance that will allow steadfast blog readers to enjoy what many of them have been missing and I’ll be able to earn decent money as a writer, one who’s somehow managed to avoid getting a real job since 1992.

I was diagnosed of Herpes a ago and I have tried all possible means to get the cure but all to no avail, until I saw a post in a health forum about a Herbal Doctor(Dr Akhigbe) who prepares herbal medicine to cure all kind of diseases including Herpes, at first i doubted, if it was real but decided to give him a trial, when I contacted Dr Akhigbe through his Email: drrealakhigbe@gmail.com he guided me and prepared a herbal medicine and sent it to me via courier Delivery service,when I received the package (herbal medicine) He gave me instructions on how to consume it,I started using it as instructed and I stopped getting outbreaks and the sores started vanishing, could you believe I was cured of this deadly virus within two to three weeks and notices changes in my body. Days of using this REMEDY,couldn't believe the healing at first until I see it as my HERPES  get cleared like magic Dr Akhigbe also use his herbal medicine to cure diseases like, HIV, HERPES, CANCER, ALS, CHRONIC DISEASE, HEART DISEASE, LUPUS, ASTHMA,  DIABETES, MAR-BURG VIRUS,  HEPATITIS A AND B.ECZEMA, BACK PAIN, EXTERNAL INFECTION ,ASTHMA, MALARIA, DENGUE FEVER, BACTERIA DIARRHEA, RABIES, OBESITY, PROGENITOR,  MENINGITIS, ARTHRITIS, EPILEPSY,STROKE, LYMPHEDEMA, GALLSTONE, DICK AND BREAST ENLARGEMENT, PULMONARY HYPERTENSION, PENIS  EJACULATION, ,   HPV, DICK ENLARGEMENT, IMPOTENCE, DENGUE, TETANUS, CORNELIA DISEASE, OSTEOPOROSIS, RHEUMATISM, THYROID, COLD & FLU,KIDNEY DISEASE,ACME. AGORAPHOBIA, PROTOPLASMIC  ERYSIPELAS. etc Contact this great herbal Doctor today the father of herbal root cure. via Email: drrealakhigbe@gmail.com or whatsapp him  +2348025012866   and get cured permanently He is real..website:      https:drrealakhigbe.weebly.com