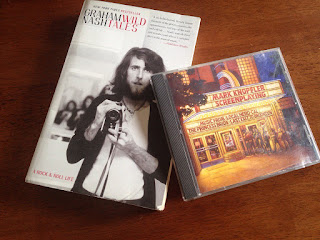 I have to tell you right up front you’re not going to like this one. So don’t say I didn’t warn you. But I’ve got to call you out for your poor judgement and duplicity.

First, you’re persisting in reading despite my honest admission that this one’s a stinker.

Second, I know you’ve been lying. It’s a huge lie, one I’ll bet you tell at least once every six or so months (once a week if you’re raising sassy kids).

The whopper in question?

Saying “I told you so,” to someone who’s just ignored your best advice and fallen flat on their face is one of life’s most sublime joys. It’s maybe the only lie we can tell that allows to simultaneously appear both wise and obnoxious.

And a squall of ITYSs are bound for me as soon as I post this and it’s all because of the innocuous looking picture up top.

Because as soon as I post this, my phone is going to detonate with a profanity-laced ITYS. Or maybe my friend Jim’ll resort to fireworks and sky writing.

Because for, oh, about six months now Jim, an omnibus Tin Lizzy golf/drinking/music/book buddy, and I have been engaged in a tipsy sort of whodunnit over the objects in the picture.

We’ve been swapping books for more than a year now and he meets the key requirements of every good book buddy, those being shared interests, a reverence for the printed word, careful book stewardship (it’s a book, not a coaster), and an understanding that burrowed books must be returned in a timely manner.

That last part is key.

To not return a book is in some cases and depending on the book a capital offense. To book lovers, books mean that much — more than even some of our children.

Well, about six or so months ago, Jim asked when I planned on returning the Graham Nash book and the Mark Knopfler CD you see above.

Return ‘em? Sorry, ol’ pal, I said. I clearly remember returning them to you about a month ago.

This was a lie. Jim drinks 1800 Tequila; I guzzle Wild Turkey. There is nothing “clearly” recollected when the two of get together.

But I hadn’t seen either around the house or the office, the only two places where I’d have had my hands on the items. I said they had to be in his house someplace. “Either that or you lost them,” I taunted.

He'd bring it up about once a week. The book, especially, was a sore spot, as it was a gift from his girlfriend. A keepsake.

But that didn’t make me feel any less righteous.

I felt that way right up to Saturday while during a rare burst of spring cleaning, I saw an unusual looking bag near the shelves where I keep my treasured books.

Spoiler alert! It was Jim’s book/CD.

I decided to use the belated find as a teachable moment for the kids. I explained the situation and asked what they thought we should do.

Our options, I said, were to do the right thing and admit my error; burn the books and go to my grave insisting I was right and Jim was an idiot; or sneak them into Jim’s house and leave them somewhere he’d find them in another 10 or 15 years when I’ll be dead and he’ll feel the kind of shame from which he’d never recover.

I was perversely pleased that no one said I should do the right thing.

In the end, this is what I decided to do and in about five minutes from now submit to a howling ITYS.

You get nothing. A sloppy, rather formulaic ending to a blog that inside of one week you won’t even remember reading. A complete waste of time.

The day the Muzak died

I am America’s drinking buddy

I pranked the trash man today
Posted by Chris Rodell at 9:27 AM

Email ThisBlogThis!Share to TwitterShare to FacebookShare to Pinterest
Labels: arguments, Graham Nash, I told you so, pranks