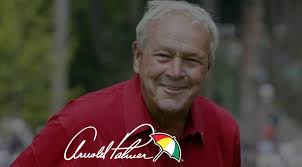 I wonder if people would think I was taking things too far if they knew I was thinking about plastic surgery to make me look exactly like Arnold Palmer. That way I could skip the sometimes tedious bits of me telling stories about Arnold Palmer and vault right into the role of being Arnold Palmer.

I think it’s what Palmer would do. He held nothing back.

Today would have been his 89th birthday.

I’ll be celebrating with not one, but two book signings — and, whew, both are indoors! I’ll be at the hometown Youngstown Grille from 10 to 1 p.m., and at the Penn Area Library in Harrison City at 6:30 p.m..

Each has the potential to be special.

“He was is in here for breakfast every other week or so,” says Grille owner Scott Levin. “He liked our French Toast so much, he asked for the recipe so he could have it made for him when he left for the winter. And Jerry Palmer was always in here. He was just a great guy, too. We miss them both.”

Levin remembers the time Arnold Palmer was in for breakfast when an awestruck young father sheepishly approached his table with his 2-year-old son in his arms. “He told him he’d named the boy Palmer in his honor. They’d never met before. It was beautiful. And it happened right here in the Youngstown Grille.”

I like the story of Palmer and Tom Ridge dining there, both wearing AriZona Tea Co. shirts. Levin’s young son, Jeremy, saw the shirts and asked if the famous pair were traveling sales reps.

The Grille — just named by Tribune-Review readers as best breakfast in Latrobe! — has been aggressive in promotions and I’ve at every step been humbled by community support.

And I’m eager to present my talk at the Penn Library. I donated some advance books two weeks ago and was warmly greeted by enthused staff.

So, yes, both have the potential to be special.

Of course as few know better than I, both also have the potential to be incredibly lame.

I’ll never forget the time I was invited to speak at the prestigious main Carnegie Library in Oakland … and no one showed up. Not a single person. It was an abject humiliation. Pittsburgh that year had a population of 307,504 and on that afternoon every single one of them had something better to do than hear me talk.

The library staff were embarrassed for me and struggled for excuses. They couldn’t understand it, one said. The previous week’s program had drawn 86 people.

So having appearance-altering surgery would be a small price to pay to avoid another disgrace like that.

Think, too, of how interest in my public appearances would zoom. Event planners wouldn’t be hiring me.

And Palmer exuded matchless charm. Actor Kirk Douglas said in 1970 that no one -- not Sinatra, John Wayne or Ronald Reagan -- had more charisma than Palmer.

So if I rudely burp beer in your face, you’re disgusted and I’m an uncouth lout. But if it’s me looking like Palmer and burping beer in your face it’s like you’ve been sneezed on by nectar-sipping butterflies.

I could tell Palmer stories in the first person. I could fool the whole world into thinking I was the legendary golfer brought back to life. I could do this right up until someone asked to see me swing a golf club.

And that would be the end of that.

No matter. I’m just spouting off. When it comes to surgery, I’m just too chicken.

But I guess in the eyes of some you can never be too chicken.

Is the Tin Lizzy really haunted?