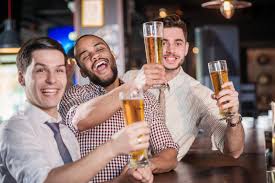 Val and I had such a wonderful time at the Great American Banana Split Festival I vow to no longer refer to it with my snide alternative.

That being the Great American B.S. Festival.

But the Latrobe festival, now in its 6th year, is becoming a rousing success. A highlight for us was the Yellow Tie Gala at the Latrobe Art Center.

One of the festival organizers told me the gala was a hit. “The only complaint I heard,” he said, “was some guests saw a couple of young men sneak in to the open bar to steal beer.”

Steal beer? I said, suddenly alert. How many?

I had to stifle a laugh. In the grand scheme of things, “just a couple” amounts to little more than spillage.

I know because I once took part in the Great Columbus Draft Beer Heist.

I’m ambivalent about revealing the details here because it was, I guess, a criminal misdemeanor. And I’m reluctant to encourage others in the ways of crafty theft. And I know a lot of people think drinking is bad, a societal woe, and drunkenness shouldn’t be celebrated.

To those thoughtful contrarians, I say …

Get your own damn blog!

These are tense times. I think it’s a good for people to know that the free drunk still exists.

I helped make it happen in Columbus back in the late 1980s, back when my life was playing out like one long beer commercial.

As this arrangement would not do for impatient sophisticates like my friends and I, we found an enterprising-looking guy working the Budweiser taps and made him an offer: We’d give him $20 up front and he’d give us free beers whenever we were empty.

And for an hour, it worked like a charm. But then he abruptly announced his shift was ending and it was time for him to vamoose.

I thought we were screwed.

But my buddy Bob had an idea. He said, “Follow me,” and made a beeline for the busiest beer table on the lot. Once there he slid beneath the barricade as the frantic bartender began to object.

“What the hell do you think you’re doing?” he said.

“I’m Frank,” Bob said. “Bill told me you were swamped and said I should come over and help out.”

Bob/Frank had been touched by genius. He poured two beers and handed them to me. Seeing his genius had inspired mine so I promptly threw the beers to the pavement.

My tirade immediately earned my friend the crowd’s sympathy. I'd made myself out to be the bad guy so none of the other bartenders would want to wait on me. Bob/Frank poured me two more and said, “Sir, please understand we’re doing the best we can. Be patient …”

What happened over the next hour was like the miracle of the loaves and fishes only with Red Solo cups and cheap domestic beer. He’d hand me two beers and I’d pass them back to our friends who’d eventually pass them off to nearby girls or other friendly strangers.

A good time was had by all.

Still, I understand there’s some moral ambiguity in this tale. We stole no money, no gems, but clearly we took something of value in the eyes of the thirsty recipients. Stealing foamy beers and giving them to young inebriates, it wasn’t like we could claim the mantle of Robin Hood.

Of  course, none of this troubled us at the time. Me, Bob/Frank and our friends all enjoyed a good giggle and when an organizer showed up asking to see the evening's receipts we just did what came natural.