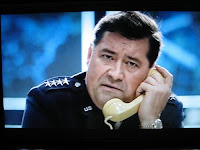 The first tiny ants of the season have invaded our home and that means Valerie immediately ordered the family straight to DEFCON 2.

The familiar military term DEFCON comes from Defense Readiness Condition, a phrase that originated during the Cold War and signifies, in descending order, how prepared the top brass are to go to all-out nuclear war (DEFCON 5 equals peace; DEFCON 1 equals Ka-BOOM!).

I like throwing the word DEFCON around because it always reminds me of the great 1983 movie, “War Games,” where Matthew Broderick plays a mischievous computer hacker whose shenanigans with NORAD (North American Aerospace Defense Command) computers nearly leads to an unauthorized nuclear launch that would lead to a MAD (Mutually Assured Destruction) result.

Say what you want about the anxieties and crushing paranoia of the Cold War but, gosh, the epoch sure left us with a dandy batch of acronyms.

The movie includes what could be the rallying cry for beleaguered technophobes everywhere. It happens when Gen. Jack Beringer (played by Barry Corbin) gets so exasperated at having his authority usurped by confounding tech problems, he bellows, “Goddamnit, I’d piss on a spark plug if I thought it would do any good!”

I imagine Val would let me piss on an ant if she thought it would do any good.

But she must know it would not, something every guy already knows. The ant is a formidable antagonist. Each ant is capable of lifting nearly 25 times its body weight with its “mandibles” (that’s the entomological term for ant jaws and as soon I finish this post I’m going to try and find out if ants call human jaws “antdibles”).

Think about that. It would be like me or you seizing a Volkswagen by the bumper with our teeth and lifting it over our heads.

So by those extrapolations, it’s a sort of fair fight whenever I simultaneously squash a dozen of them with one swing of my slipper.

Maybe it’s a female thing, but I never get bent out of sorts by bugs or beasts in the house. I’m a pacifist at heart and, truly, would rather not hurt a fly.

I try and reason with them. I tell them they aren’t wanted. I offer alternatives. I tell them I’ll give them a ride to a nearby park.

But that doesn’t work and it always falls to me to protect the tribe. And that usually means splat. Bats, spiders, flies, mice, I’ve got a body count that would probably reach into the thousands.

We’re pet-less right now, but when we had the cat and the dog, the lousy fleas would pop up every now and again. And with fleas I could be ruthless.

Val would always play the diplomat and encourage incremental steps. Not me, I didn’t pussyfoot around. I ordered the family out of the house and would coldly bomb the nasty little bastards back to the Stone Ages.

That’s in stark contrast to how I dealt with the most menacing creature that ever invaded one of my dwellings. The thing was about 5-foot-8, weighed 175 and smelled like infernal corruption.

It was back about in 1990 at a tiny little two-man newspaper office I shared with my buddy Paul. I remember coming in late from some tedious municipal meeting and hearing the closet door in the darkened office rattle shut.

I pulled on the door. It pulled back.

Turns out he was a homeless guy who’d found the key above the door and had been napping nights in the office. He’d been there about a week or so. Neither of us ever had a clue.

I could have called the cops. Instead, I took him next door to the bar where my buddy was watching the game. I’m not going to say he wound up all bombed like the fleas, but we bought him a few drinks. Paul drove him to a Salvation Army shelter that night.

But I don’t know what happened to the guy.

I like to think we helped him on his way. I think if we’d have dealt with him harshly, it might have backfired. He knew our names and where we worked. It wouldn’t have been difficult or unprecedented for the guy to find out where we lived and come after us.

He could have creeped into our homes and become a real pest.
Posted by Chris Rodell at 3:44 PM