"You're the greatest swimmer ever! Now what?" 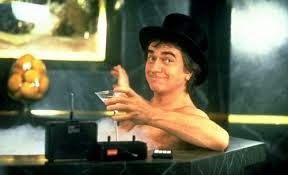 It was because of Michael Phelps, underwater cameras and glorious 48-inch HDTV that I’ve said things in the past week I never thought I’d say about a nearly naked man.

“Look, it’s so beautiful. Do you see how the splash of bubbles runs over his body? Look at the dolphin-like way he moves. Magnificent! I’ve never seen anything like it. Go Michael! Go! Go! Go!”

And away he went for eight gold medals. He’s the world’s greatest swimmer and the hands-down star of these great Olympics.

And in five years, that’ll mean precisely, what?

ESPN’s “Mike and Mike” were talking on Monday about what Phelps will do next to capitalize on his instant and well-deserved global fame. Will he turn to acting? Will he continue to compete? Advertising? Corporate sponsorships?

They thoroughly cited every proven example of what he could do to ensure he remains relevant, if anyone who spends hour after mind-numbing hour in a pool without devolving back into a sea creature could ever be considered relevant at all.

The only logical and fun option for a 23-year-old swimmer who experts say is on the verge of a multi-million dollar payday is to become Arthur.

Arthur was the Dudley Moore character in the title role of the 1981 movie of the same name.

He’ll be the role model for me if, cross your fingers, I’m ever bestowed instant and bottom-less wealth. There’s never been a better example of a happy drunk than Arthur Bach. He left $1,000 tips, was kind to and revered by his staff of flunkies and drivers, and generally laughed through life as though he were being tickled by a giant invisible feather.

I remember the first time I saw the movie and thinking they were going to ruin him in the end by making him poor and happy or -- worse -- sober and happy, but the producers never flinched. In the end he got all the money, he got the girl and, I suppose, went through the rest of his life without ever drawing a single sober breath.

And if I can ever shed the shackles of my wage-earning requirements, that’s exactly what I’m going to do.

I advise the same for Phelps. Certainly, the appeal -- if ever there was one -- of getting up every day, tucking his goodies into the Speedo and jumping into a chilly pool is waning. Swimming-wise, it’s all downhill from here. Further competition will only dim his luster.

Acting? Not going to happen for him. He’s got a good-natured and goofy smile that would be great for Jay Leno skits, but the ladies are never going to line up to watch him star in a remake of, say, “The Bodyguard.”

Forget corporate sponsorships. That would be a life of going around and glad-handing with obnoxious mostly white, mostly male corporate Republicans whose idea of humor is making cheap Speedo jokes like the ones I only flirted with in previous paragraphs.

It would be enough to drive any man to drink.

That’s why I’m urging him to become the first man to swim to drink.

Phelps should reap the waiting bonanza of endorsements experts say is in the neighborhood of $10 million, retire, and simply enjoy life.

He should build a huge mansion near the Inner Harbor at his Baltimore hometown, a great place to party. He should build an enormous and lavish pool with waterslides, a lazy river and invite all the inner city and neighborhood kids to stop by anytime they’d want. An adults-only section could feature the world’s largest swim-up Hooters.

I just hope he’ll hire a sober squad of lifeguards to tend to him whenever he’s near the water.

It wouldn’t do to have a man who’d made his fortune swimming like a fish drown after drinking like one.
Posted by Chris Rodell at 12:19 PM