Hooray! It's time for tweets of the month! 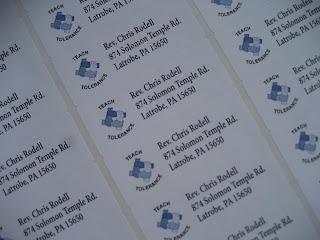 Sometimes I think my tweets are maturing while I am not. Some profound stuff here. And for the second month in a row, not one fart joke! It concerns me because I know if they ever learn how to fix a leaky faucet my wife is gonna leave me for the tweets.

Foto is of the fraudulent address label's I've used since 2008 when I wrote this, my fourth post ever.

• I have to think it depresses shoe factory morale that maybe a quarter of the employees report to a department under a sign that reads “HEELS.”


• Bible says our bodies are temples. On Friday nights, mine is more like a honky tonk. Some beer's been spilled, some of the furniture is busted & it smells kinda funny. But the folks are friendly, the peanuts are free and the good music never ends.

• The older I get the more convinced I become that the whole sum of life is equivalent to the pointless milling about we do for the 3 or 4 hours we have to kill until the front desk tells us our room is ready.

• I don't know of a single adult or child even, who carries around even a single marble in his or her pocket or purse. Yet the phrases, "All the marbles," and "lost his marbles" persist in the vernacular. Oh, take me back to that whimsical era when the possession of marbles conveyed both wealth and wisdom!

• I admire spouses who pull off the physically contradictory trick of standing beside someone who is flat on the floor.

• I’ve back-burnered so many important projects my fears are the stove will soon catch fire and I'll be unable to recognize the blaze as a priority before it consumes the whole building.

• Weed” is today a $55 billion business. "Weed" is cultivated, sheltered, nurtured and cared for more lovingly than some rare orchids. My point: Nothing about "weed" suggests weed so let's all stop calling "weed" weed.

• It flips language logic on its head, but being self-employed ain't working for me.

• How did the phrase "pigeon hole" ever evolve into such common usage when I know of not one person who can affirm they are familiar with even one pigeon's hole?

• It is my contention that one of the most devastating aspects of climate change -- catastrophic rise in sea levels -- could be eliminated if all these massive water displacing cargo ships were simultaneously removed from the water.

• Spent yesterday seeking to confirm intimacy studies that contend 90 percent of adult men/women enjoy being hugged. My results were exact opposite. People were furious at my cheerful embrace. I'll try again today but with a slightly different approach. Today I'm wearing pants!

• I try and see the good in everyone. With some of you it takes a little squinting. Then there are those that require spying through one of those telescopes the astronomers use to spy clear to the edge of the universe. If you think that might be you, you need to try harder.

• If an affluent person is well-to-do, does that make me well-to-don’t?

• Last year I asked you to buy, "Arnold Palmer: Homespun Stories of The King," for your father. This year I'm asking you to buy one for ANY father. Father's Day is just 25 days away! All books signed thus, "This is NOT a golf book. This is a LIFE book!”

• I wonder what kind of pushy sales tactics a prosthetic salesman would have to produce to end the month up in arms.

• Mother Teresa came from a large family with three sisters, all of whom had large families themselves.
Q: Did her nieces/nephews call her Aunt Mother Teresa? Aunt Teresa?

• Worry not about being popular today. Worry instead about being yourself EVERYDAY and you'll soon appreciate the meaninglessness of popularity.

• If you were following yourself in a car how many times a day would you give yourself the finger?

• Because the weather in heaven will always be perfect, "Some weather we're having," will be replaced as a conversational ice-breaker by, "So how'd you die?" So an interesting earth death -- say kicked in the head by a runaway mule -- might lead to more popularity among angels.